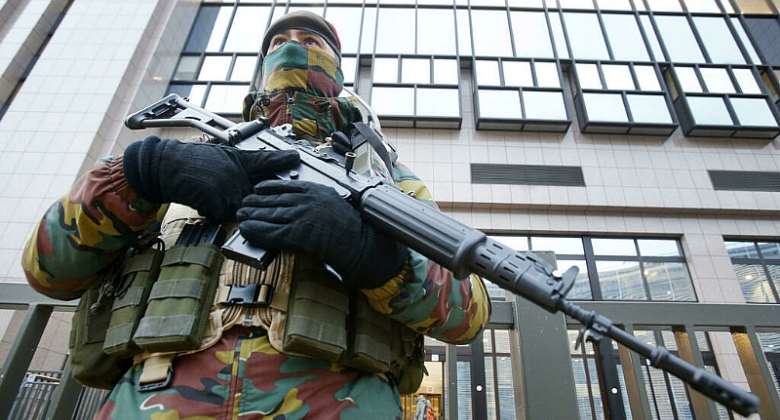 The official aim of Friday's session of the Paris attacks trial was to hear evidence from Belgian police investigators on the backgrounds of two of the dead terrorists and one other suspect. The hearing was, however, marked by the refusal of five prisoners to appear before the court, and by a series of angry clashes between the tribunal in Paris and the police witnesses in Brussels.

Four prisoners . . . Salah Abdeslam, Mohamed Abrini, Sofien Ayari and Osama Krayem . . . once again refused to take their places in the security enclosure reserved for the accused. A fifth suspect, Mohamed Bakkali, joined the ranks of the absent at the opening of Friday's hearing.

The men say they are protesting a decision by the court to allow Belgian police witnesses to testify anonymously and from Brussels.

The trial continued in their absence.
The general anger over the refusal of the Belgian judicial authorities to cooperate with Paris was not long in making itself felt.

Did Belgian investigators get it wrong?

The first officer in Brussels outlined the life and criminal career of Brahim Abdeslam, who blew himself up in a central Paris café on 13 November 2015, having participated in the terrace shootings in the French capital earlier that night.

In the midst of details already established from other evidence, the Belgian policeman told the court that Brahim Abdeslam had been questioned on several occasions because of his links to known Islamic radicals.

When arrested in February 2015 he was in possession of a document on jihadist action. He was in internet contact with Abdelhaim Abaaoud, another of the Paris killers and a notorious Islamic State activist in Syria. When Abdeslam himself returned from Syria in 2015, he denied all links with IS and jihad. He was believed.

Several French media, notably France 2 TV and the daily paper Le Monde, have published reports suggesting that the Belgian police allowed a key suspect to slip through their fingers.

Brahim Abdeslam and his brother Salah had been identified as potentially dangerous by investigators as early as the summer of 2014. But the information was ignored. The police report containing the original warning has since been lost.

A second Belgian officer took up the story of Ahmed Dahmani, one of the 20 accused in this trial, currently serving 10 years in a Turkish prison for the possession of false documents.

A friend of the Abdeslam brothers since childhood, Dahmani was also close to IS kingpin Abdelhamid Abaaoud. He was on friendly trerms and in frequent contact with several other accused.

And then a third Belgian officer gave evidence about Khalid El Bakraoui, the terrorist who died in the 2016 Brussels metro attack. He is suspected of having helped the Paris killers in several ways, notably in renting transport and hideouts.

Once again, the defence showed little patience with the hesitations of the witness on certain subjects, one lawyer noting that the policeman testifying was actually a stand-in for a sick colleague and was not fully briefed.

"What degree of confidence can we thus have in the Belgian police?" he pointedly asked.

The president of the Paris tribunal has already made his position absolutely clear. "If you don't get the answers this court needs," Jean-Louis Périès said in the wake of earlier criticism of the Belgian contribution to the debate on Thursday, "you can be very sure that I will!"