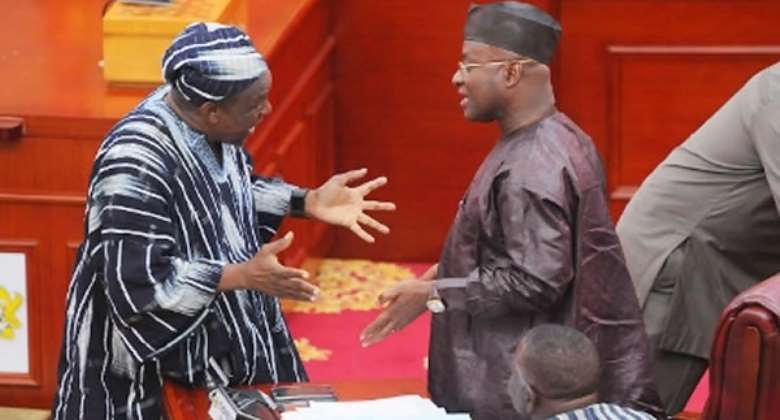 Majority Leader of Parliament, Osei Kyei-Mensah-Bonsu has said the rejection of the 2022 budget by Speaker Alban Bagbin on Friday, 26 November 2021, was unconstitutionally done.

The Suame MP argued that the motion for the approval of the budget still stands despite the Speaker’s ruling.

“That whole procedure was unconstitutional”, he told journalists after the rejection of the budget.

“As far as we are concerned, it’s null and void and has no binding effect on anybody”, he noted.

He insisted: “The motion on the budget, as far as we are concerned, hasn’t been pronounced on by parliament and it’s still standing in the name of the Finance Minister and in the fullness of time, a properly constituted house, not one presided over by the Rt Honorable Speaker, will make the decision”.

The Majority caucus walked out of the house during proceedings on Friday evening after their insistence that the General Secretary of the main opposition National Democratic Congress (NDC), Mr Johnson Asiedu Nketia, be walked out of the public gallery of the chamber just as the Speaker had asked the Marshall to walk out some non-MPs of the house for deliberations to continue.

The Minority side resisted the move from the Majority side saying Mr Nketia was not going anywhere.

The Majority then staged a walkout after which the Speaker suspended sitting for five minutes and later reconvened the one-sided house to make a ruling.

The Majority Leader, however, argued that: “Article 104 (1) of the Constitution says matters in parliament shall be determined by the vote of the majority of members present and voting with, at least, half of all members of parliament present”.

“We have cause to believe that, at least, 2 of the NDC MPs were not in the chamber and yet out of mischief, the Speaker said that they were 137”.

“In any event, even if you go with 137, it is still less than one-half of the 275 members of the chamber, so when he puts the question, the Speaker should have known that the number would not support the decision of the house”, Mr Kyei-Mensah-Bonsu noted.

“So, that purported decision is a nullity and does not have any effect on anybody,” he said.