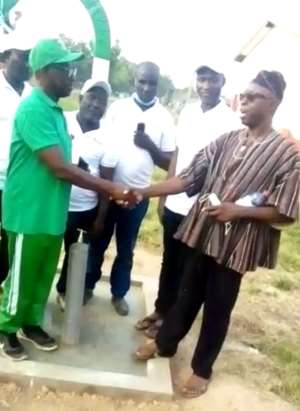 As part of efforts by the old students to mitigate the water shortage in Damongo Senior High School, the 1984 year group drilled a borehole, mechanised and pipped the water to the John Mahammah and Ewutomah House.

The said water system was handed over by the 1984 batch to the old students association to be commissioned after the programme and officially handed over to the school.

Handing over the water system on behalf of 1984 year group, Tolodompewura Abdallah Ahmed aka Monor a member of the year group and also the acting National Vice President of the Oldstudents Association said the problem of insufficient water in the school is due to insufficient underground water and lamented that many people have put lots of efforts to get water to the school with little or no success.

Chief Monor called on government and other agents to make it a policy to provide rainwater harvesting facilities when putting up public buildings.

The President of the association who took delivery of the system thanked D84 and said it would go a long way to reduce students movement to town in search of water.

Other people who witnessed the ceremony include but not limited to Messrs Atomy Sasa, Bala, Sofo Sulemana, Lawyer Zankawa, George Attah.

Meanwhile, the 50th anniversary celebration of the school which is slated for today, Saturday, November 27 is expected to be graced by the Vice President of the Republic of Ghana, His Excellency Alhaji Dr. Mahamuud Bawumia and a host other high ranking government officials.