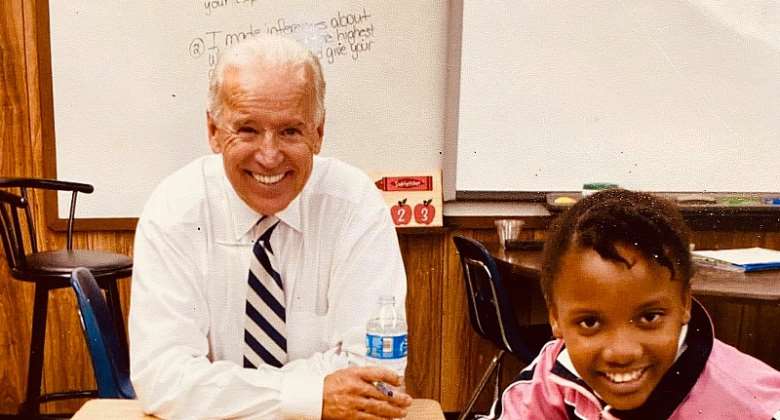 The day the Nortreus family met with the current U.S. President Joe Biden was in 2013 or 2014, but Joe Biden was Vice President at the time. The picture above is a historical picture of Werley Nortreus's younger sister with Joe Biden as they were discussing education and the future.

The Nortreus family is a highly educated family and one of the most powerful families in Haiti. The former U.S. Senator and Vice President Joe Biden now described as the current President of the United States, one of the best and largest countries in the world. I remind you that Joe Biden has been a member of the Democratic Party since he was a longtime senator. According to the Nortreus family, Werley Nortreus is the only one in politics and they are not.

At the time the Nortreus family met with Joe Biden, Barack Obama was president. A member of the Democratic Party, Joe Biden served as the 47th vice president from 2009 to 2017 under Barack Obama and represented Delaware in the United States Senate from 1973 to 2009. Now, Joe Biden is the 46th U.S. President and Kamala Harris is Vice President.

“President Joe Biden is very inspiring and proves that people can always accomplish their dreams even when they will take little time to achieve. At any age, people can always fulfill their dreams. Thank you, Joe Biden, for inspiring me to always follow my dreams even if my dreams are taking a while. Don’t be discouraged and all of my dreams will come true soon”, said Mr. Werley Nortreus, a Haitian political leader and founder of Vanyan Sòlda Ayiti and Haitians Lives Matter.

In the Nortreus family, you will find leaders, intellectuals, philosophers, pastors, evangelists, musicians, doctors, businessmen, nurses, authors, entrepreneurs, politicians, and others who hold high positions in society. According to much research, the Nortreus family is one of the families fighting hard to change the current situation in Haiti and the situation of Haitians living in the diaspora as well.

The Nortreus family even asked the Barack Obama administration to give immigrants living in the United States green cards and much more because immigrants work hard to improve the U.S. economy. Well, today, Joe Biden becomes President, and he signed to give green cards and citizenships to all immigrants.

Keep up with Werley at princewerleynortreus.info