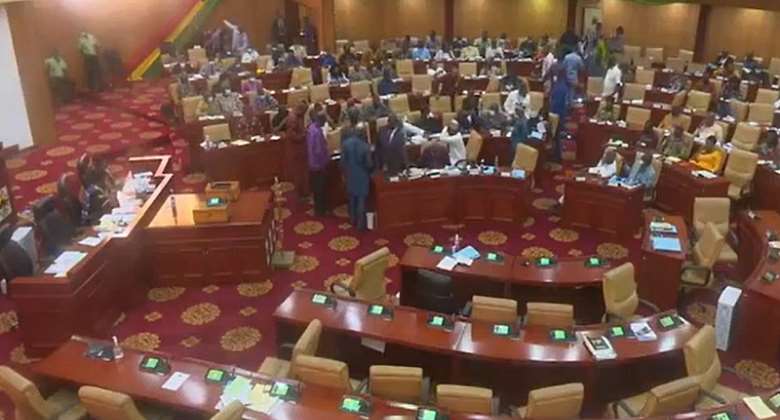 Parliament has rejected the approval of the 2022 budget statement.

This was after members on the Majority side of Parliament staged a walkout during proceedings.

This follows a disagreement over a directive by the Speaker of Parliament, Alban Bagbin, for non-MPs to vacate the Chamber.

Parliament had through a voice vote rejected a request by the Minister of Finance, Ken Ofori-Atta, to meet the leadership of the House before the approval of the 2022 budget.

Deputy Majority Leader, Alexander Afenyo Markin, challenged the Speaker’s interpretation of the voice vote and called for a ‘division’.

Mr. Bagbin thus directed that, per orders of the House, non-MPs had to vacate the Chamber during the voice division process.

While vacating the Chamber, the Majority MPs demanded that the General Secretary of the opposition National Democratic Congress, Johnson Asiedu Nketiah, who was sitting in the public gallery at the time, must also exit the House but that request was ignored.

This infuriated the Majority MPs who walked out of the Chamber, leaving only members on the Minority side.

The Speaker of Parliament thus suspended the sitting for five minutes.

The House resume after 20minutes but the Majority side of the House failed to return.

This time around, the Speaker adopted a headcount in the absence of the Majority side of the House.

He indicated that the Majority side of the House walked out of their own business.