The kingmakers and council of elders of Asante Adehyeman of Dallas, Texas have chosen new traditional leaders to steer the affairs of the association.
By George Kwasi Bright || Contributor
Diaspora (USA) 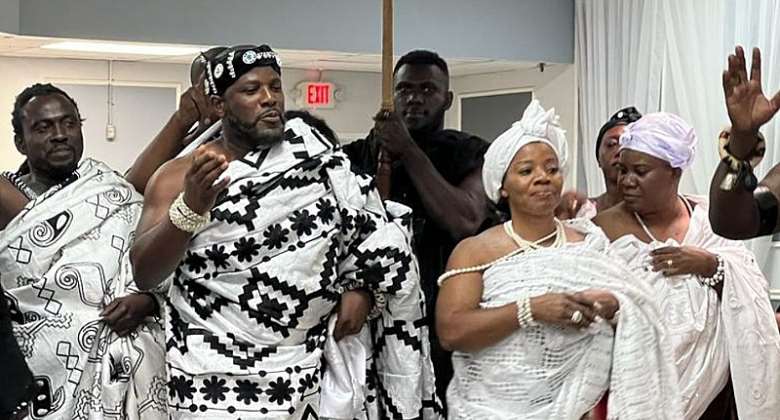 On Saturday, November 20 the leaders swore the oath of allegiance before the council of elders in the presence of the ACONA president, Nana Adu Opoku Asante Kotoko Onyame Akoa who is also the Asantefuohene of Cincinnati, Ohio. ACONA is the umbrella organization of all Asanteman associations in USA and Canada. Clad in traditional “kuntukuni” clothes The Abusuapanin Nana Kojo Mbrah introduced the new traditional leaders to the council of elders after which they took turns to swear the oath of allegiance to uphold the traditions and culture of Asanteman, to make themselves available to serve and never to turn their backs against Asanteman when called upon. Nana Poku the ACONA President advised the new traditional custodians to forge a united front and project the Asante culture as ambassadors of Asanteman in Dallas, Texas. He also implored them to conduct themselves in dignity as the responsibilities and positions they have taken upon themselves command respect.

After the traditional swearing in ceremony the newly enstooled traditional leaders changed their clothing from Black “kuntunkuni” to white to signify celebration and the dawn of a new era.

In his address Nana Nframa Okogyeaman Gyebi Ababio 1 the new Asante Adehyemanhene expressed his profound appreciation to the association for standing with him and made a firm commitment to them to keep the unity intact. Nana Ababio asked all members to join in the effort to encourage the youth to take interest in the activities of Asanteman in order for them to embrace the traditions and culture. He said there is so much to learn from that as they would appreciate how to greet and address elders appropriately, how to conduct themselves with pride as Asantes and also appreciate their heritage. Oh her part Nana Ama Serwaa Ampeh the Adehyemanhemaa assured the association that she would do everything to ensure that the association would be developmental oriented and would contribute their quota to support the development of Asanteman.

At a later date Nana Nframa Okogyeaman Gyebi Ababio 1would seek the permission and blessing of Otumfuo Nana Osei-Tutu II to cap his installation with a final oath of allegiance before Otumfuo’s representative. The following were outdoored as the traditional authorities of Asante Adehyeman of Dallas Texas.

Nana Gyebi Ababio And The Obaahemaa And Other Traditional Leaders