Mining In The Ghanaian Forest Reserve 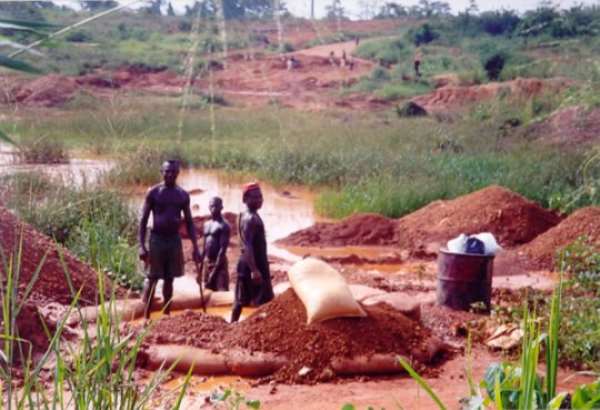 Gold, a mining resource, buried deep under the forest reserve of Ghana, is to be mined only after getting all stakeholders (government, citizens, shareholders, environmentalists, mining companies) to agree on the most effective means of exploitation to minimize the negative impact of mining on the environment. A plan of action for effective mineral development requires broad objectives of ensuring optimal use of indigenous land to stimulate rural development for the benefit of the locals and shareholders.

The reported granting of mining leases in the Ghanaian forest reserve to some international mining companies can only be justified with a detailed study of the impact on the environmental, legal, social, political and other sectors. Such report should be in the public domain for all to review and evaluate for a public discussion on the pros and cons of the exploitation of the mineral resources.

It is a fact that a natural resource is of no value if it is not exploited and value added. It is however important for any government to take steps to ensure that the negative effects of such an operation are either eliminated or minimized. A recent statement by the sector minister that such a resource cannot be allowed to lie idle, created the impression that the government will encourage mining in the forest reserve, no matter the concerns of others. The reported granting of mining leases in the forest attests to the government’s commitment to such a venture. This article attempts to suggest some ways to exploit the gold in a professional manner. It is hoped that this publication will propagate the debate in the interest of the government, citizens and other stakeholders. THE FOREST RESERVE The Colonial government realized the importance of the forest to the citizens and ecology of the nation, and created an act in the late twenties to protect virgin forests in specified areas of the country. In a developing economy like Ghana, where over 50% of the population depends on the forest for shelter, feeding, drinking and medical purposes, the importance of the forest cannot be over-emphasized. Although it has been illegal for any activity in most of the forest reserves, the report has it that the surface area of the forest dwindled from 1.8m hectares in 1957, to 1.2m hectares now, within a timeframe of about 50 years! Such a reduction has had a negative effect on the biosphere and its inhabitants, threatening the survival of man and animals. It then implies that the granting of mining leases will accelerate the rate of deforestation and compound the problems. Some of the forest reserves, which are mentioned, include Subri River, Supuma Shelter Belt, Opon Mansi, Tano Suraw, Suraw Extension and Cape Three Points. The others are Ajenjua Bepo, and the Atewa ranges. All these (and others) are so important to Ghana that the last thing any well-meaning citizen will want to do, is to reduce their size by a meter.

Ghana seems to be fighting two ‘natural’ enemies from the north and south (respectively) – extension of the Sahara from the North down, and erosion from the sea to the North. The extension of the grassland from the Northern Ghana through Brong Ahafo to certain portions of the Ashanti region, can be attributed to deforestation and lack of any commitment to keep it in check. A programme to plant trees could have prevented such degradation. IMPACT OF MINING Mining for gold in the forest reserve will affect various sectors of the Ghanaian society – political, economic, social, technological, legal and environmental.

The government stands to gain some political points on the local scene, as jobs will be created. Unfortunately, however, she is bound to lose face with governments of the advanced countries who are more concerned with the impact on life. It will not be surprising to have some governments refusing aid and/or grants to Ghana because of such environmentally unfriendly processes. Other well-meaning banking consortiums would not want to finance any projects such as these. The creation of jobs will bring in the much needed foreign exchange to cushion the effects of the government’s economic problems, but it will be an example of ‘cutting one’s nose to spite the face’.

The rural areas will be developed, as small businesses (hotels, estates, recreational) will spring up for the period that mining is undertaken. Royalties, paid to the local government, could lead to improvement in the economy, but the open-pit mining method will lead to vast areas of land being stripped of vegetation – to get to the depth at a safe, overall slope-angle. The removal of overburden will increase erosion and the silt, carried along by surface run-off, will eventually be carried downstream, leading to flooding and blocking of waterways. A trip to the rural areas reveals trenches, tunnels, and pits which are abandoned by reputable mining companies and by small-scale operators. This will be a repetition of the small-scale mining law introduced by the previous regime. The venture was to bring in some foreign exchange, but the implementation was poorly executed.

Wildlife habitats are destroyed and the animals become exposed to poachers. Drinking water (stream) pollution in Ghana, by cyanide spill from mining operations, is a common occurrence – the report of a fourth cyanide spill in Ghana is still fresh in our minds! It is believed that a lot of premature deaths occur as a result of cyanide poisoning in aqua life and humans. Some animals have been drowned or killed for game, and mosquitoes have had their breeding grounds enhanced. No wonder malaria cases are increasing everyday, with resultant deaths especially in children and the aged.

The forest reserves are sources of medical treatment for about 40% of the population who still depend on traditional medicine as their only source of health care. Around the same percentage of Ghanaians depend on streams for their domestic water requirements – for drinking and cooking. Such streams either start as aquifers from rocks in the forest reserves, or are protected by the shade of the forest as they meander towards the sea. They also serve as the natural habitat of thousands of endangered species, which would otherwise have been extinct. Due to erosion, land fertility is decreased, leading to reduced agricultural production. Deforestation results in high poverty and mortality rates, and increased school dropout rate. The impact of deforestation cuts across all spheres of the economy.

The law enforcement agencies in mining have failed to function and this gross negligence has contributed to the current state of environmental degradation. Legally, the section of the mining regulation which charges mine owners to be responsible for the operation (including closure) seems to have been deleted!

The modification of the current mining regulation in Ghana (Henry Antwi, 2002) should be given a serious consideration. UNANSWERED QUESTIONS Mining is a science and methods are selected specifically for each anomaly, taking into consideration the characteristics of the deposit – thickness, extent, dip, depth, grade, type of ore, etc. These factors are considered in the economic evaluation of the deposit, to calculate the mining rate, and revenue to be generated in the life of the mine. Infrastructure in the area (water, roads, and electricity) is also considered for sustained energy requirements of the mine. Surface mining leads to arable land being destroyed in the rural areas where subsistence farming is practiced. The questions demanding answers are: What areas are we looking at? How many trees are to be felled? What compensation packages are put together for citizens whose farms are to be destroyed? What action is taken to supply amenities to local communities, including (but not exempting) re-location? Is reclamation of the land part of the contract? What drainage and treatment of effluent water policies are designed to ensure that streams are not polluted? Are systems in place to monitor noise, dust and toxic waste levels in the environment? Is drinking water (well-drilling programme) part of the package, and who maintains the pumps, and for how long? COMMITTEE The government would be saved a lot of trouble if lessons were learnt from the recent unrest in the Prestea Township, where the citizenry opposed the extension of surface mining to the town. Much as they see the proposal as a source or revenue, important decisions of this nature should be taken based on recommendations by an independent, non-partisan body set up for each deposit on a case-by-case basis. It is suggested that all stakeholders should be represented on such a board. It could consist of the sector minister’s representative, representatives of leading opposition parties, environmental engineers, and activists, mining engineers, representatives of the local communities, traditional leaders and community representatives and their appointees, local law enforcement agencies. The committee should be equipped with necessary resources to make recommendations to the government within an initial six-month period. The ministerial sub-committee, who will present a common front before the parliamentary sub-committee on mining, should review the proposals. The committee should regard the issue as something that has the potential to make or kill the Ghanaian economy and should therefore not politicize the issues. If the proposals are accepted at this level, an education strategy should be designed to market the proposal to the local community. The negative and positive contributions to the area under consideration must be openly discussed and any remedial methods should be communicated to them. Due to the system of government in such areas, it would be very effective to involve the local chief and his elders and other opinion leaders in the management of the implementation process. Conflict resolution procedures should be put together to avert industrial unrest and ensure smooth operation. To ensure that the terms of the agreement are not violated, a committee of the stakeholders should be appointed and backed by the government, to monitor the performance of the mining companies throughout the life of the mine. The government, through its independent monitoring body, should ensure strict adherence to all parts of the contract and defaulters should be prosecuted in international courts. We acknowledge the role of the Ministry of Mines, Environmental Protection Agency, Minerals Commission etc, but current developments in Ghana indicate that actions taken by government are seriously deficient. These government bodies suffer from inadequate budget and are therefore constrained in the monitoring and development of relevant legislation. Although many of the staff may have strong academic qualifications, some have little practical experience and therefore makes it difficult for them to relate to the reality of the mining industry. Hence in many instances, political considerations override technical and environmental considerations. CONCLUSION It is possible to mine in the Ghanaian forest reserve if detailed studies are conducted for each deposit and the most suitable method (one that impacts least on the environment) is chosen. All stakeholders must be well educated on the options and there must be commitment on their parts in the interest of the Ghanaian economy. The implementation and monitoring phases should be well designed and have the backing of the government, law enforcement agencies, and other international groups. Only then can the government of Ghana even consider opening the forest reserve for mining activity. With the globalization of world economies, mining has become international in character and requires the combination of physical, financial and technical resources. Our experience indicates that mining thrives best in a climate of cooperation among all stakeholders and therefore it is the responsibility of governments to pursue the exploitation of mineral resources through intelligent resource planning and the involvement of locals and traditional leaders in the environmental management of mines. By F. K. Appiah-Brenyah, Mining Engineer, USA and Henry Antwi, Mining Consultant, Australia. Views expressed by the author(s) do not necessarily reflect those of GhanaHomePage.