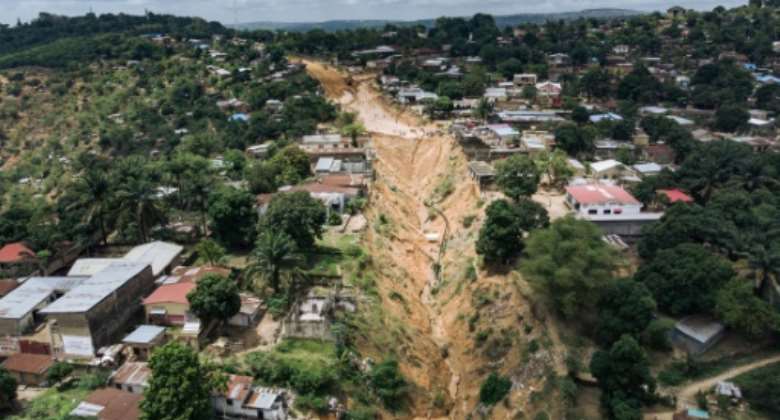 Unplanned urbanisation and a lack of maintenance have caused roads to collapse in Kinshasa during the rainy season. By ALEXIS HUGUET (AFP)

The water transformed a main road into a ravine. It gutted homes, exposing their innards to the world. It left a school playground teetering on the edge of a precipice.

These images come from Kinshasa, capital of the Democratic Republic of Congo, where a population influx combined with scant urban planning has exposed many poor people to the impacts of extreme weather.

Millions of people have moved into the city in recent years, although the exact numbers are unknown as no census has been conducted for more than 30 years.

According to some estimates, the city is home to at least 12 million people, a doubling in two decades, out of a national population of some 90 million.

Many have built homes in areas where there has been little planning oversight, especially on hillsides where drains and channels are needed to cope with runoff during the rainy season.

At the top of a cliff in Kinshasa's southern district of Mont-Ngafula, disused water pipes hang in a void and residents must battle through a gully of shifting sand to reach the neighbouring district.

Floodwater dug out an asphalt avenue, replacing it with an abyss at least 15 metres (50 feet) deep, separating the University of Kinshasa from a Jesuit-run library, one of the biggest in Africa.

Widowed mother-of-seven Esperance Tsimba, 57, saw the earth swallow her shop and livelihood as the rains fell.

A woman and a boy look through the collapsed wall of a house after a landslide in Kinshasa. By ALEXIS HUGUET (AFP)

"I lost my business. Since then, it has been hard to send my children to school", she said.

Local residents are building dykes to protect their homes, piling up sandbags in the hope of slowing the landslide and diverting rainwater flows.

They staged a protest to demand action from the authorities, blocking Highway 1, which crosses the town, said resident Magloire Kangondi.

The authorities sent in a Chinese-owned construction vehicle, which has started to smooth out the sand on the road downstream.

But locals are worried that work will stop at a temporary fix, and not address the underlying problem.

"This isn't the first time that they've repaired the road -- it's been done several times without success," said Sylvain Nsumbu, headmaster of a primary school whose wall had fallen into the abyss.

A man carries bamboo through the ruins of collapsed houses in Kinshasa. By ALEXIS HUGUET (AFP)

Nsumbu said children as young as four had to cross the ravine to attend a kindergarten and that some parents even preferred not to send their offspring to school.

Christel Bulembi, an environment management specialist and community leader in the neighbourhood of Ngansele, said the solution was for the authorities to dig at least one rainwater retention pit to minimise the damage caused by runoff onto the road.

The state "must accept its responsibilities" by having allowed the neighbourhood to urbanise, and would win the local population's support by doing so, Bulembi suggested.

Office of Special Prosecutor still without a board
30 minutes ago

Annoh-Dompreh hints at reviewing 1.75% E-levy when Parliamen...
30 minutes ago