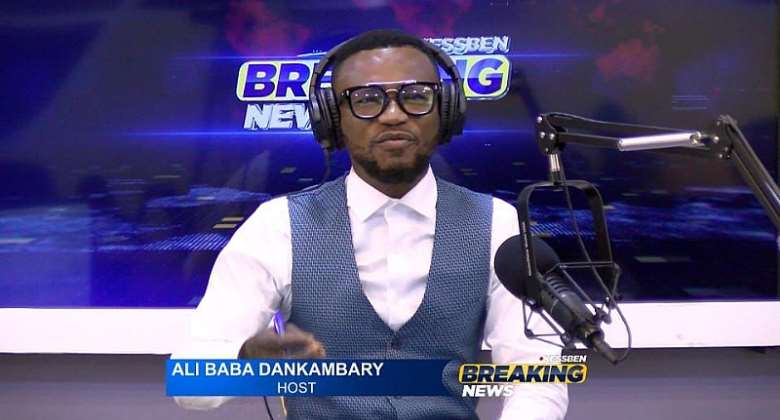 Another popular presenter at Kessben Media, Ali Baba Dankanbari has joined the list of high-profiled persons resigning from the media house.

He is said to have tendered in his resignation letter to the management on Friday, few moments before going on air to present his popular show, 'Breaking News.'

Ali Baba, who was one time Ashanti’s best and most listened to Social News Presenter, with his renowned “Breaking News” program says it was time he moves on.

This comes after Omanhene and Nana Yaw Boamah resigned this week.

Ali Baba, whose right foot is already held at Angel Broadcasting Network, (ABN) is said to have told the Chief Executive Officer of Kessben Media, Mr. Kwabena Kesse in a telephone conversation that even though he has resigned, he would stay on and help till December 1, 2021.

He is expected to start work at Angel Broadcasting Network in the first week of December.

In a social media post, Ali Baba said his sun which arose at Kessben some years ago has set today, expressing appreciation to Mr. Kesse and his colleagues.

Even though it is no longer surprising to hear of presenters resigning from Kessben Media, viewers and listeners are unhappy seeing their best presenters at the station suddenly exiting at the time the station has made entry into the capital to compete with the giants.

ModernGhana News has picked information that some presenters from Kessben Media are also lacing their boots to walk out of the station to join ABN in the coming days.

Whiles we dig deep to bring out the reasons behind these resignations, the signals we are picking is that the Chief Executive Officer of Kessben Media, Mr. Kwabena Kesse is having sleepless nights about the massive fall out and has vowed to drag them to court even though there is no formal contract between the station and the employees all these years.

I write with a heavy heart to inform management of my resignation from KESSBEN Media after dedicating myself to the service of the company fora period spanning more than a decade.

My resignation takes effect from the end of the month of November, 2021.

I wish to extend my profound gratitude to management for the opportunity granted me to sharpen my skill in broadcasting which has earned me a reputation as one of the most popular broadcasters in Ashanti and beyond.

I apologized unreservedly for the short notice in respect of the disclosure of my decision and hope that management would find a replacement to continue from where I left off.