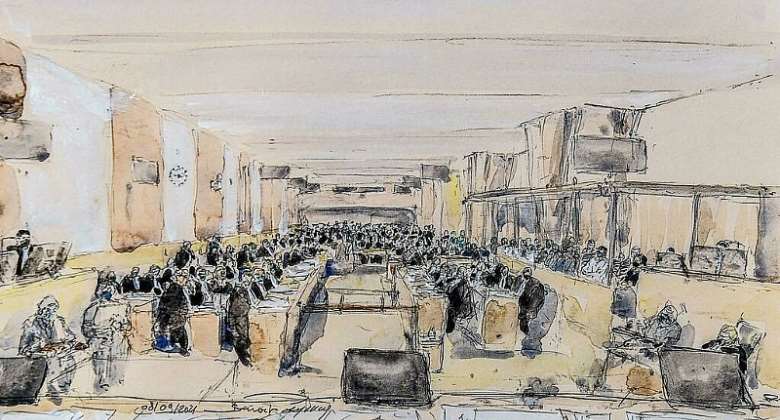 Wednesday's evidence at the Paris attacks trial focused for the second successive day on Adel Haddadi and Muhammed Usman, both accused of planning a terrorist action in France. They were stopped by Austrian police as they tried to cross Europe. The court heard from an officer who questioned the two men in the wake of their arrest.

"He seemed to me to be a man caught in a moral dilemma." The man was Adel Haddadi. The opinion was offered  by Tomas Pepper, a police officer attached to the Austrian Interior Ministry in Vienna. The dilemma was that of an individual sent unwillingly on a suicide mission by people of whom he was absolutely terrified.

On Wednesday, by means of a laborious and not always clear translation from the German, Pepper told the court the Austrian version of a story we have already heard from French police investigators.

What the accused Muhammed Usman, a native of Pakistan, who had the same partial information re-translated from French into Urdu, made of the whole business is anybody's guess. Most of the time, he seemed to be asleep.

The pair were arrested at a refugee camp in the western Austrian city of Salzburg in early December, 2015, following an Interpol alert that suspected IS terrorists linked to the Paris attacks were at large in Europe. The two men were interviewed 21 times by Austrian police investigators.

Both admitted that they had been sent to Europe by Islamic State, with a view to carrying out a suicide attack in France.

One of the interviews was initiated by Adel Haddadi himself. Tomas Pepper said the prisoner was emotional, frequently contradictory and, on this occasion, seemed genuinely terrified.

He told the Austrian policeman that he needed help because Islamic State was very powerful. He was scared that the Syrian-based terror organisation would track him down and kill him. He said they knew his real name and identity, as well as details about his family in Algeria, because they had confiscated his phone when he first arrived in Syria.

In one particular outburst, he told Tomas Pepper "it's not easy to kill people".

The following day, however, Haddadi was more in control of himself and retracted most of the statements made in the previous interview.

Muhammed Usman was a tougher proposition.
He was interviewed by the Austrian police authorities on seven occasions, compared to 14 for Haddadi.

Not even his date of birth could be established with any certainty.

He was unemotional but self-contradictory and unclear. He claimed simply to have been following orders. He had been told to go to France and carry out a suicide attack.

When asked what was his sense of life, Muhammed Usman apparently replied that he did not understand the question, adding that he had never been allowed to decide anything for himself. This from a man who left his home in Pakistan's Punjab and made his way to the Syrian war zone in search, he says, of a place where he could live under a pure interpretation of Islam.

Usman had no difficulty in accepting the horrific punishments . . . homosexuals thrown from high buildings, thieves mutilated, adulterers stoned to death . . . ordered under that "pure interpretation".

He implied that Haddadi was the driving force of their shared enterprise and that Usman himself had no particular personal motivation.

The Pakistani appears to have been generally isolated as a speaker of Urdu surrounded by other linguistic groups.

He communicated with Haddadi on their European travels "by the hands and feet" to quote the translation of one of Tomas Pepper's answers yesterday.

The Austrian officer said the series of interviews with the two men had been difficult and unsatisfactory. Vienna ended the questioning of the prisoners once their extradition to France had been agreed.