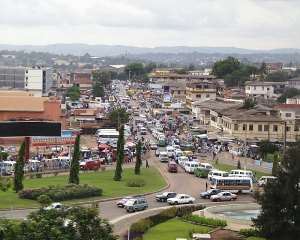 The Chief Imam of Achiase, a town along the Kumasi-Barrekese road in the Atwima Nwabiagya North District of Ashanti Region, Imam Ahmed Adams Antwi has admonished the youth to stop migrating from their villages to the urban cities in search of non-existing white color jobs.

The Imam was reacting to the cases where some youth decide to leave the rural areas in search of greener pastures in the urban cities but eventually ended up in bad companies engaging in criminal activities just to survive.

According to him, he differs in option that there are no jobs in the rural areas.

He attributed the menace to laziness and the get rich quick attitude of the youth in recent times.

The Imam indicated that prosperity comes from hard work, focus and dedication.

According to him, the youth see apprenticeship and farming as work for villagers and illiterates, unknown to them that the so-called villagers' jobs are the best profession one can make life out of it.

"Instead of the youth make efforts to adopt interest in farming or assigned themselves into apprenticeship programs to better their future, they rather depend on white color jobs which are non-existence.

"Suppose an accountant, pilot, manager among other high-ranking officials who are wealthy and decide to put up a mansion, which person of these academicians services would be required, is it not artisans?" he stressed.

The Chief Imam calls for a national strategy to develop the interest of the youth in vocational skills and farming to help curb the rising cases of crime in society.

Latest Photo Reports
Catch up with all the political quotes from our politicians.
Advertise here
More Social News
ModernGhana Links
Nima Clashes: I ran for my life after hearing gunshots - Resident
Hyundai Sonata burns to ashes on Tema- Accra Motorway
There is no spirit in beads, spirits can only dwell in it when someone invoked, chants words into it —Nana Ogyedom
Police stop gun fight in Nima
Techiman South election petition: NDC’s application to file extra witness statements dismissed
US pastor trends after rubbing spit on congregant’s face during sermon
Ministry of Foreign Affairs denies agreement with UK to host deportees in Ghana
Agogo: Three men escape lynching after allegedly killing 15-year-old boy at Nhyiaeso
Commission indicts Yahya Jammeh, 13 others over murder of 44 Ghanaians in The Gambia
TOP STORIES