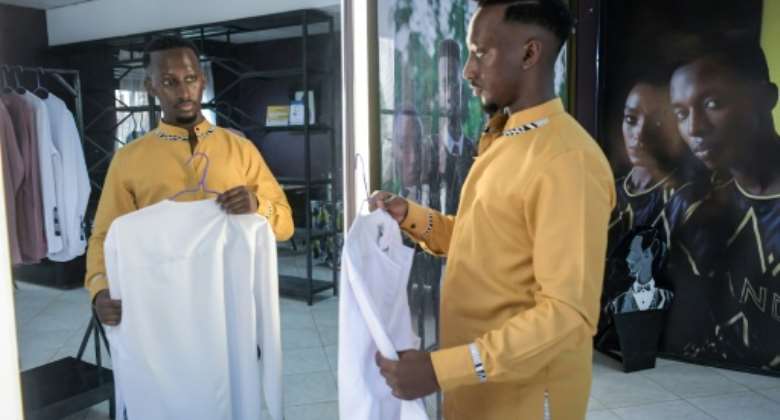 Interest in Matthew Rugamba's brand House of Tayo exploded after one of his creations was worn to the 'Black Panther' premiere. By Simon MAINA (AFP)

Matthew Rugamba knew his Rwandan fashion label had arrived when Junior Nyong'o, the brother of Oscar winner Lupita Nyong'o, attended the world premiere of "Black Panther" in a three-piece suit designed by him.

Hours after the glitzy event in Los Angeles, the website for Rugamba's brand House of Tayo exploded as enquiries flooded in from around the globe for his high-end creations.

"It changed the perspective," the 32-year-old told AFP, still stunned by the turn of events that propelled his "made-in-Rwanda" label to a Hollywood red carpet.

"For so many years we have been telling people our fashion is good... but sometimes you need moments like that to really take it to the next level," said Rugamba, who holds dual Rwandan and British nationality.

Kigali has yet to reach the heights of Africa's fashion hub Lagos, but the capital of the small landlocked nation of 13 million hosts its own fashion week and draws a devoted clientele, comprising wealthy locals, expatriates, members of the diaspora and tourists.

"I like the way they tailor the clothes, the way they design their clothes, I like the simplicity of it as well," said Emmanuel Safari, a lawyer and frequent visitor to the House of Tayo boutique located in an upscale Kigali neighbourhood.

"The clothes, you put them on and you feel good!"

Some Rwandan labels have even attracted the attentions of President Paul Kagame, who was pictured wearing a shirt by bespoke Kigali brand Moshions.

But what is "Kigali style"?

"It pops but it's not flashy," according to Jean-Victor Brun, a 50-year-old Haitian-American who came to Rwanda to develop projects in new technologies.

"Modern, ethnic, and rooted in the identity of our country," says Joselyne Umutoniwase, founder of Rwanda Clothing.

Identity is at the heart of many Rwandan brands, which excel in producing bespoke clothing -- drawing on a tailoring tradition that dates back decades.

For instance, Umutoniwase, who employs 45 people, incorporates the geometric designs characteristic of imigongo art -- a style of painting which uses cow dung and natural pigments -- into her creations.

Similarly, the beadwork found on royal headdresses and other traditional items finds its way onto jacket lapels, while Rwandan shoe label Uzuri K&Y borrows from the country's weaving traditions to create braided sandals.

The brand's co-founder Ysolde Shimwe said young designers like her were keen to change Rwanda's image, 27 years after the 1994 genocide killed more than 800,000 people, mainly Tutsis.

"Ten years ago when you Googled Rwanda you only saw machetes, people killing each other and hungry kids in the streets," she told AFP.

"We as designers in Rwanda are also contributing to change the narrative of Rwanda and mostly to changing how people perceive Rwanda, because we are more than that, we are more than our historical background."

Rwanda's fashion industry has also received a helping hand from the government, which in 2016-17 massively hiked import taxes on second-hand clothing -- mainly from the US and Europe -- to promote local manufacturers.

The move, which saw duties multiply more than tenfold, effectively imposed a moratorium on trade involving the sale of secondhand clothing from the West at low prices to East African consumers.

The devastation wrought by the genocide has also contributed to a huge skills shortage in the country. By Simon MAINA (AFP)

But, with more than 80 percent of the population living in rural areas, according to the World Bank, many Rwandans cannot afford these homegrown brands.

Umutoniwase, whose prices range from around $70 (60 euros) for a shirt to $80 (70 euros) for a dress, told AFP the small market size presented big challenges.

Moreover, the devastation wrought by the genocide has also contributed to a huge skills shortage in the country, said designer Shimwe.

"Eight years ago when we wanted to start a shoemaking brand we could not necessarily find skilled labour, there was literally nobody that had experience or had shoemaking skills," she said.

But in a sign of the industry's bullish growth prospects, some of the nearly 1,100 staff trained by her have since gone on to found their own labels, she said.

"It's a great cycle that we have been able to create."