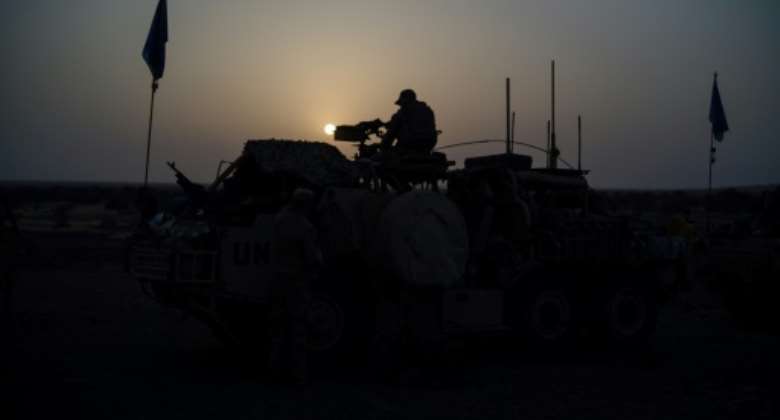 Shine a light: UN peacekeepers are among the array of forces in Mali's troubled northeast. By FLORENT VERGNES (AFP)

Security forces in the Menaka region of northeastern Mali are struggling with a kaleidoscope of militia groups as they strive to bring order to the violence-torn area.

Almost every important armed group in Mali has a foothold in Menaka, from the so-called Islamic State group to Al-Qaeda affiliates and former Tuareg rebels.

The chaos dates back nine years, when a separatist rebellion in northern Mali spiralled after it was commandeered by jihadists.

Malian troops, UN peacekeepers, French soldiers and more recently special forces from the Takuba international task force are all deployed to the region.

But identifying friend from foe is a key task -- all the militias tend to wear headscarves, wield AK-47s and travel in pick-up trucks.

Lieutenant-Colonel Will Meddings, head of Britain's contingent of UN peacekeepers, compares the situation to a jigsaw puzzle.

Menaka lies in the heart of one of the Sahel's most turbulent zones. By (AFP)

Even among foreign forces, identification can be a problem.

An AFP reporter gained a first-hand glimpse of how Meddings' troops have taken a grassroots approach to tackling the identification problem.

A British officer who gave his name as Charlie walked over to five men from an authorised armed group, who were sipping tea under the shade of a tree, their assault rifles beside them.

He calmly asked them a few questions about who they were. The men, who appeared to pose no threat, replied that they were on watch to "stop jihadists from coming."

The region's officially designated armed groups hold a weekly meeting in the town of Menaka.

These groups are former rebels who took up arms in 2012 before signing a peace agreement with the government in 2015. They now operate with official licence.

The region's governor, Mohamed Maiga, said the groups operate independently but use the weekly meeting to exchange information and glean intelligence about the patchwork of territorial control in the sparsely inhabited region.

Within the constellation of militias in Menaka, alliances are brittle, and there is often a hazy line separating jihadists from other armed groups.

"There are more hats than heads," said Francisco Osler De Almeida, the local head of the UN's MINUSMA peacekeeping mission.

But the surrounding desert is controlled mainly by Islamic State jihadists, according to Maiga.

No government officials are stationed outside the town in the desert expanses where even UN peacekeepers seldom tread.

Civilians in the countryside are left to fend for themselves, forced to pay taxes to jihadists and face punishment if they refuse.

Killings are also common. Early this month, 69 civilians were killed in the village of Banibangou in neighbouring Niger, not far from Menaka.

"In the bush, there are only the jihadists," says a man from a village who sought refuge in Menaka town, and whose name AFP is withholding.

A senior MINUSMA official who requested anonymity said there is little understanding of what is happening in the countryside.

"The void has always been there," he said. "In the bush, there has never been (the) state."

In September, UN forces brought Maiga to a village 28 kilometres (17 miles) from Menaka town. The visit marked the first time a government official had paid a visit since Mali's independence from France in 1960.

For some, state absence across swathes of Mali are at the source of the country's woes.

Almeida warned that the longer the state takes to establish itself "the more difficult the problems."