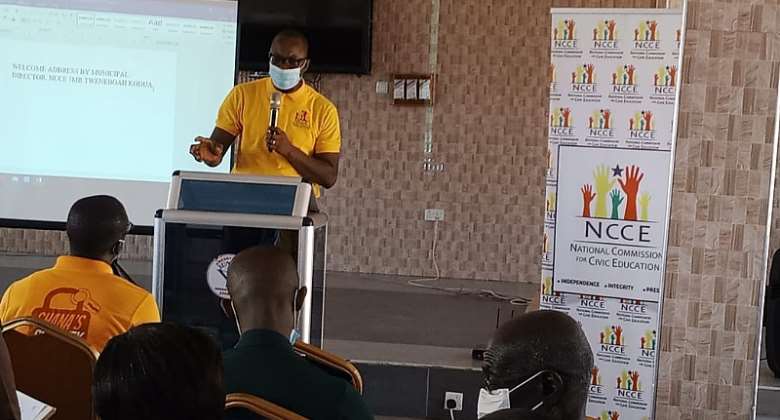 Even mere extremism has been noted to be a devilish canker to any society in the world, not to talk about its violent form.

The canker has caused destruction to millions of lives and property around the world, hence, the need to put in place stringent measures to fight its existence.

As part of the preventive measures, the Asokwa Municipal Assembly’s office of the National Commission for Civic Education (NCCE), last Tuesday, organised a stakeholders' conference on the matter.

The engagement, held at the Asokwa Presbyterian Church conference hall, was aimed at soliciting views from stakeholders towards the fight against the dangerous canker.

Organised under the theme “Fighting Violent Extremism- the Role of the Society", the program was attended by identifiable groups, traditional and religious leaders, security experts, among others.

Chaired by Nana Fe Baamoah, Asokwahene, the well-attended program, was under the sponsorship of the Asokwa Municipal Assembly and some benevolent organisations in the municipality.

Welcoming the attendees, the Asokwa Municipal Director of NCCE Mr Nathaniel Tweneboah Kodua, expressed delight for the engagement, which he described as timely and crucial for the peace and stability of the municipality.

He expressed the hope that, the meeting will provide the needed blueprint for the fight against violent extremism in the locality.

Mr Kodua described violent extremism as an unhealthy development which called for collaborative efforts towards its removal from the society.

He stressed that no society can create wealth for her people, when violent extremism exists, citing instances in some parts of Africa and Middle East where the canker exist in greater height.

The Municipal NCCE Director, was full of praise for the assembly's sponsorship and the presence of the invitees for the programme .

In his address, the Ashanti regional security liaison officer Colonel (rtd) Kofi Arthur, reiterated the need for an all-hands-on-deck approach towards the elimination of violent extremism from society.

He commended organisers of the programme for the initiative and advocated same to be replicated across the country.

He said the measure was vital because it has the potency to nib in the bud, the development of violent extremism.

He contended that when the public order act is respected at all times, actions that lead to violent extremism can be curtailed from the scratch.