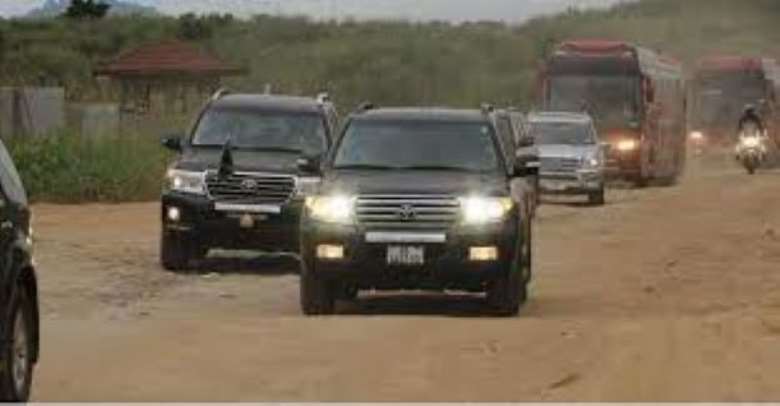 A convoy of Members of Parliament in the early hours of Thursday, November 25, foiled a highway robbery attack on the Sampa-Mankraso highway.

The robbers, who took advantage of the cover of darkness, held several commuters and passengers hostage and robbed them.

Using assorted weapons, the robbers held their victims at gunpoint and succeeded in unleashing terror on them until an approaching headlight cut short their operation.

That headlight emanated from a convoy of three V8 vehicles occupied by three Members of Parliament on their way to Sampa-Mankraso.

Ningo-Prampram MP, Samuel Nartey George; Ho West MP Emmanuel Kwasi Bedzrah and South Dayi MP Rockson-Nelson Dafeamekpor, who were on their way to an official engagement when they chanced on the robbery.

The sound of the engines from their vehicles was not enough to stop the robbers who opened fire on the MPs.

The robbers, sensing the superior gunfire from the opposite end, fled the crime scene using the forest cover for their getaway.

Ningo-Prampram MP Sam George took to social media to offer praises to God for coming through for him and his colleagues and asked for the police to be offered all the needed support to fight armed robbery, especially as Christmas approaches.

PHOTOS: Hundreds of workers stranded at Lapaz as commercial ...
21 minutes ago