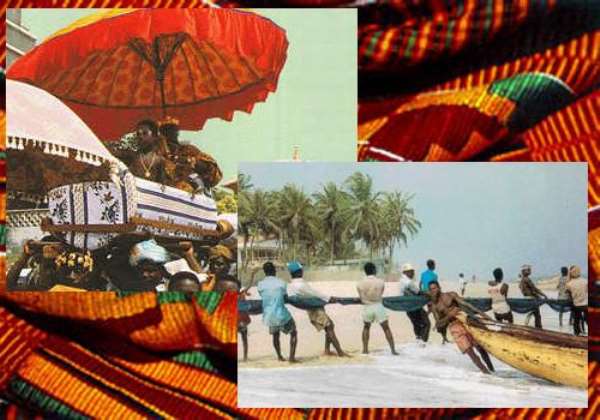 Tourism to West Africa arises with this joyful, safe, optimistic, and wallet-friendly country Matthew LinkARTHUR FROMMER'S BUDGET TRAVEL I had dreamed of going to Africa ever since I was a boy watching National Geographic documentaries. What I found on a recent trip to Ghana was as mesmerizing as anything in my wildest dreams, and even better: beautifully friendly people, soul-stirring history, thriving culture, and incredibly economical prices. Why more Americans don’t visit dynamic and warm-hearted West Africa, I’ll never understand. ALTHOUGH LOCATED in a sometimes troubled region (Liberia, Sierra Leone, and Nigeria have all experienced conflicts in the recent past), English-speaking Ghana is a far-removed model of stability and tranquility. As the world looks at Africa’s woes, Ghana marches into the 21st Century with liberated markets, high foreign investment, a peaceful multi-tribal and multi-religious populace, and most of all, stable politics. Former Treasury Secretary Paul O’Neill praised the country in a recent speech in Accra, the nation’s capital (where he was traveling with rock star Bono), stating that “Ghana is showing it can offer continuous rule of law, even with changes in power.” In February of this year, the IMF and World Bank took the step of reducing Ghana’s debt burden due to the government’s reforms. Ghana also gets much positive press due to charismatic U.N. Secretary General Kofi Annan being Ghanaian by birth. I felt very safe in Accra, Ghana’s capital city of two million, were crime seemed lower than in many U.S. cities its size. It’s a low-rise city with plenty of shaded residential neighborhoods, and spacious beaches beckon a half-hour drive away. Pickpockets, taxi drivers who overcharge, and traffic are the worst culprits most tourists will ever have to deal with. If you bear in mind that most Ghanaians make $100 or less a month, and then take into consideration the amount most travelers carry with them, it’s amazing tourist crime is so low. As the locals proudly declare, “Ghana is a country of laws.” If gold medals were given to the world’s friendliest peoples, Ghanaians would definitely be semi-finalists. Endowed with a sweet, jovial character, travelers are met with smile and waves wherever the go, even in the big cities. Young people often sung out to me the word “Obruni!” (foreigner) in a fun-loving manner. Ghanaians have a long relationship with America — the country’s founding father, Kwame Nkrumah, was a professor at U.S. universities before he became president. When President Clinton visited in 1998, he was swarmed by adoring crowds who treated him like a returning king. SEEING THE SIGHTS An area where Ghanaians and Americans are linked is through the Trans-Atlantic slave trade. During the 18th and 19th centuries, millions of slaves were deported from West Africa, funneled through Ghana’s coastal slave fortresses, where many perished in dungeons like animals. Centuries-old castles like St. George’s Castle, Cape Coast Castle, and Fort Metal Cross dot Ghana’s coastline a few hours’ drive west from Accra, and are open to the public (entrance fees are an amazing $3 or less), drawing many visitors, particularly African-Americans in search of their roots. Besides Accra and the coastal castles, the third leg of the tourist “triangle” is the inland city of Kumasi. The seat of the Ashanti Kingdom, this gold-rich region offers fascinating craft villages where you can witness ancient arts like Kente cloth weaving and fabrics stamped with unique Adinkra symbols, as well as reconstructed palaces where the royal family once lived. THE PRICES YOU’LL PAY One of the best things I liked about Ghana were the prices: meals at local eateries are rarely more than $3, and some guesthouses almost give away rooms for $5 per person per night. For instance, large meals of local favorites like spicy groundnut (peanut) soup with chicken and fired yams is a mere $2.75, and a big club sandwich with fries is only $1.60 at Country Kitchen (tel. 229-107), a laid-back open air restaurant in the mellow Cantonments area of Accra. The Korkdam Hotel (21/226-797, 21/223-221) in the tree-lined Asylum Down area has rooms with private baths, air conditioning, TVs, and desks for $10 per person per night, along with $2.50 cooked breakfasts. Another great value in Asylum Down is the Beverly Hills Hotel (21/224-042) with twelve serene rooms for $15 per person, including air conditioning, private bath, TV, and radio. Even lush five-star properties in Ghana start at only $90 per person per night. Some Tour operators regularly sends Americans to Ghana for around $1,999 for nine days, including airfare from the United States, tours, and most meals. In this one case you may NOT want to shop around: The majority of mainstream advertised tours will easily charge unaware customers double for similar tours. Ghana Airways offers convenient twice-weekly flights from New York and Washington D.C. direct to Accra for around $999 — the only airline offering nonstops from the U.S. to Ghana. For general information and news on Ghana, surf to www.ghanaweb.com .