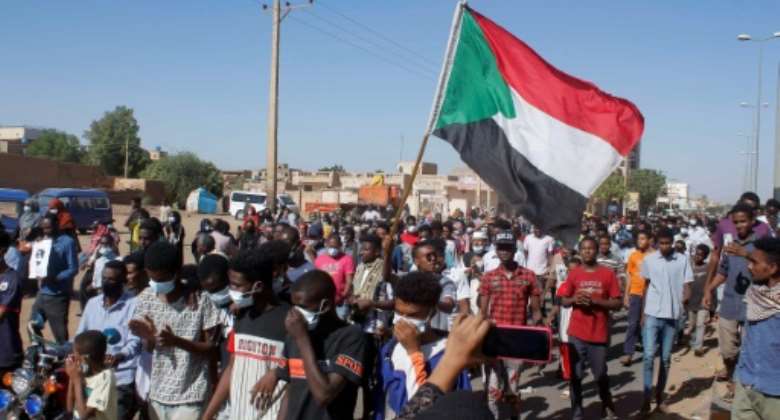 Sudanese protesters have held weeks of rallies since an October 25 power grab by the army, including this demonstration in Khartoum on November 21. By - (AFP)

In Khartoum, demonstrators chanted "the people want the downfall of the regime". In the capital's twin city Omdurman others shouted "power to the people, a civilian government is the people's choice".

But protest organisers in the northeast African state have accused Hamdok of "treason" and vowed to maintain pressure on the military-civilian authority.

Activists took to social media this week to call for "Martyrs' Day" demonstrations on Thursday, in honour of the 42 protesters killed in the post-coup crackdown, according to an updated toll from medics.

Hamdok, who has been prime minister in the transitional government since the ouster of long-time autocratic ruler Omar al-Bashir in 2019, said Wednesday he had partnered with the military in order to "stop the bloodshed" and to "not squander the gains of the last two years".

Hamdok himself was placed under house arrest after the putsch, which sparked a wave of mass street protests that triggered a deadly crackdown by security forces.

The deal he signed with Burhan lays down a "clear date" for Sudan's first free elections in three decades slated for July 2023, the premier said.

Twelve out of 17 ministers from a bloc calling for a purely civilian government resigned on Monday, rejecting Hamdok's strategy of engaging with the military.

Reserving their ire for Burhan, protesters in North Khartoum chanted that "Burhan is dirty", and had been "brought to power by Islamists", connected to the old regime of Bashir.

Ihsan Omar, a witness in Omdurman, said he had witnessed some 500 people taking part in a rally.

Volker Perthes, the UN special envoy to Sudan who helped mediate between the military and civilian factions after the coup, said Wednesday that the rallies were "another test of credibility" of the agreement.

Elsewhere in Sudan, in the western Darfur region, at least 35 people were reported to have been killed in days of fighting between herders with more than a thousand homes set on fire, officials said Thursday.

The violence broke out on November 17 between armed Arab herders in the rugged Jebel Moon mountains close to the border with Chad, said Omar Abdelkarim, Sudan's Humanitarian Aid Commissioner in West Darfur state.

Darfur was ravaged by a civil war which erupted in 2003, that pitted ethnic minority rebels complaining of discrimination against the Arab-dominated government of Bashir.

Bashir, who is wanted by the International Criminal Court to face charges of genocide in Darfur, was jailed in 2019 following mass protests against his three-decade rule.

While the main conflict in Darfur has subsided, with a peace deal struck with key rebel groups last year, the arid region has remained awash with weapons and violence often erupts over land, access to agriculture or water.