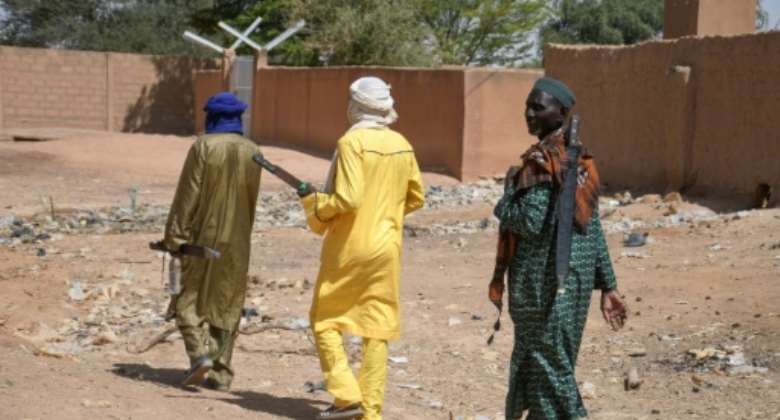 Self-defence groups have sprouted in Niger's violence-torn Tillaberi region after a string of massacres by suspected jihadists. By BOUREIMA HAMA (AFP)

Abdoulaye casts a questioning eye over the passengers of a car that has pulled up at the entrance to his village in western Niger.

Slung over the shoulder of his long and slender frame are a bow and a quiver of arrows -- the only weapon he has against the ruthless, highly-armed men who prowl the region.

"I'm a member of the Vigilance Committee," he said. "I'm just carrying out a patrol of the village."

The "Committee" is just one of the many self-defence groups that have sprouted in the violence-torn Tillaberi region.

Remote and arid, Tillaberi is reeling from a string of massacres by suspected jihadists, many of them operating from across the border in troubled Mali.

Exasperated and fearful, villagers have rushed to set up local militias -- but sometimes at deadly cost to their young men.

"Young villagers... have signed up to avenge the dead and protect their property," said a former mayor of Banibangou, a town near Abdoulaye's village.

"They are merely equipped with (bows and) arrows, knives and probably a few guns," a Banibangou resident said.

A new self-defence group emerged earlier this year in neighbouring Tahoua after 141 people were slaughtered in March.

A video circulating on social media shows men clutching automatic weapons, saying they have "taken up arms against terrorism."

But the price for openly defying the jihadists can be lethal.

At least 69 militiamen, led by the mayor of Banibangou, were killed in an ambush on November 2.

On November 16, 25 members of another self-defence group were killed at a camp in Bakorat in Tahoua.

Exasperated and fearful, villagers in western Niger have rushed to set up local militias. By BOUREIMA HAMA (AFP)

Its armed forces, operating across a vast and often empty landscape, are massively under-equipped.

As a result, President Mohamed Bazoum's government has adopted the posture of tolerating the militias, while not formally banning them.

"The government doesn't encourage people to defend themselves -- it's very dangerous for them," said General Mahamadou Abou Tarka, head of the High Authority for the Consolidation of Peace (HACP), a government institution tasked with building dialogue between communities.

"Self-defence groups may attack members" of another ethnic group that have jihadists in their ranks, and this unleashes tit-for-tat violence, Ouamarou said.

Bazoum went to Banibangou after the latest bloodshed, where he told locals that he understood why they were "not satisfied" with the army's performance.

"If you think that you can provide your own defence, that's legitimate, but the thing which should ensure your defence and on which you can count is the state," he cautioned.

In neighbouring Burkina Faso, the government has set up an official self-defence force -- the Volunteers for the Defence of the Motherland (VDP) -- to act in a supporting role for the army.

Volunteers receive 14 days of training and are then sent out on patrols and surveillance missions, equipped with light arms.

More than 250 VDP members been killed since the force was set up in December 2019, and some observers argue that the existence of the militia itself is an incentive for violence.

"It hasn't stopped the cycle of terror," a Nigerien security source said.

Seeking to drain support for creating militias and to strengthen the army, Niger's government has set up a programme to train young people to join the National Guard in jihadist-hit regions.

Around 500 have already been recruited in the southeastern region of Diffa, and 500 are expected to follow suit in Tillaberi and Tahoua, a presidential aide said.

The country is also going to buy drones, planes and armoured vehicles from Turkey.