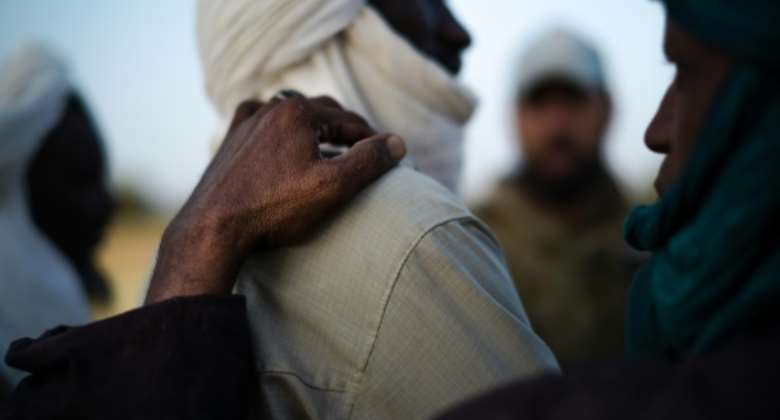 Malian villagers talk to UN peacekeepers about their problems. Interpreters play a crucial -- and risk-laden -- part in building a dialogue. By FLORENT VERGNES (AFP)

Aboubacar shared tea and sugary snacks with his colleagues gathered on a mat at a UN camp in battle-scarred Mali.

He speaks plainly but with a hint of irony about his transformation from a tour guide of 14 years experience up until 2014 into a frontline military interpreter.

After the war upended his business, he sought out work as a translator for the British contingent of the UN's mission in Mali MINUSMA.

"Before we were protecting the white tourists, but now it's the whites who protect us in the bush," he said with a smile.

There are dozens of others like him who work with the British blue helmets every day, speaking Tamasheq, Songhai or Arabic.

He pulled a scarf over his nose, donned dark glasses and became almost unrecognisable.

"It's very different from what we did before, but the goal is the same: to show the country to foreigners," said Aboubacar, an alias to protect him and his colleagues.

Aboubacar -- not his real name -- pitches up with UN peacekeepers at a bivouac near Menaka. The former tour guide works as an interpreter for the British contingent of the UN's MINUSMA mission in Mali. By FLORENT VERGNES (AFP)

There were numerous tour guides in the region during the golden age of tourism in the 1990s and 2000s.

They took visitors to see the famed mosque at Djenne, the manuscripts of Timbuktu and to bathe in the Banfora waterfalls in Burkina Faso, among other places.

But they lost their livelihoods in the 2010s when separatist movements and jihadist groups unleashed a cycle of deadly violence that made the region, rich in heritage and natural beauty, too dangerous for tourists.

Most did not find other work.

From tourists to troops

After several years of unemployment, Aboubacar followed a friend's advice and used his strong English learnt guiding tourists to approach the UN. He flew to their base at Gao which is home to the peacekeepers as well as French forces.

Now he is an intermediary with the local population, dressed in a large army jacket and weaving in and out of the bush in armoured vehicles.

Menaka lies in the notorious 'tri-border' region, where jihadists have carried out dozens of attacks over the past six years. By Maryam EL HAMOUCHI (AFP)

He makes introductions, explains the armed foreigners' mandate and the significance of their UN blue helmets.

A day later, under a leafy tree offering the only shade around, Aboubacar's colleague Moussa approached armed men whose firearms permits the force wanted to check.

Jovial and tactile, he held the shoulders of one member of the armed group, giving the impression more of a gathering of old friends than a tense encounter coloured by suspicion.

Having the translators "is absolutely central for us to do our job," said Pierre Russell of the British Army Long Range Reconnaissance Group.

"We go out and speak to the local population and without their ability to communicate in up to five or six different languages we wouldn't be able to do our job."

The total number of interpreters working with foreign forces is unknown. The dozen who spoke to AFP described a translator corps several hundred in number.

Back at the UN base, there were lively discussions.

There is nostalgia for a simpler era, when "life was good" and whites came with cameras in hand.

There are some in Mali who have criticised the intervention of the UN and France in a country where the presence of foreign forces has previously proven controversial.

Fears for the future run deep among interpreters who work with foreign forces in Mali -- many are shocked by the West's chaotic pullout from Afghanistan. By FLORENT VERGNES (AFP)

"Obviously we see things, but we keep our opinions to ourselves," said Moussa.

There is also fear that once the foreign forces leave, the Malian interpreters could face a similar fate to those who supported Western forces in Afghanistan and were suddenly left to their fate after the Taliban takeover.

In the Sahel, "either we resolve the problem and are congratulated... or the jihadists will still be there after the departure of the foreigners and we'll have to leave," said Youssouf, wistfully.

He now runs a small business employing interpreters who served with the British blue helmets.

The mood turns when the interpreters recount how some of their number have been accused of being "traitors" or called "dogs of the whites".

Some hide their work from their families, allowing them to believe they simply work in the UN camps as contractors like many other local people.

"We have to feed our families," said Youssouf.

Finance Minister announce transactions to be excluded from E...
36 minutes ago