Why Is Ghana Embassy In Berlin Still In A Container? 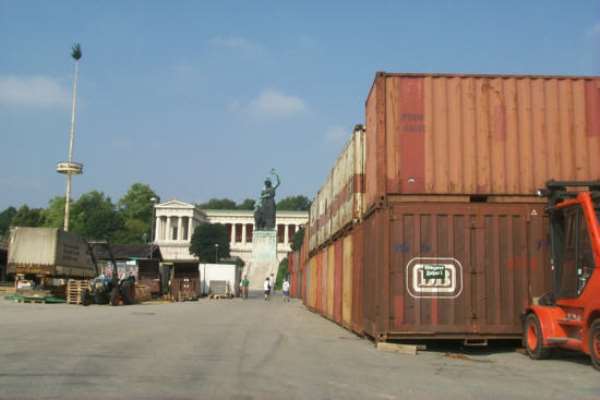 As a resident in Germany and a community leader with good knowledge of what goes on at the Ghana Embassy in Berlin, I read with interest and surprise the report by Anthony Rao about the Embassy working from a container since the beginning of this year, and the reaction of the Embassy to the publication on your website. Rao is a discredited and dishonest Rasta man who seems dedicated to waging a war against the Embassy for reasons best known to him. The man himself is not clean. Ask anyone in Hamburg and they will tell you how he has been cheating Ghanaians by pretending to help them get papers to live here. He is NOT a human rights activist. He charges heavy sums of money for his so-called human rights activities, and often he does not do what he promises. And if you confront him, he threatens to call the Police to arrest and deport you. It surprises us all how he is treated in Ghana like a champion of Ghana in Germany. Next time he is on radio in Ghana, please ask him the following questions- 1.whether or not it is true that he is a mental patient, carries a disabled certificate and lives on government benefit in a disabled peoples flat 2. Whether it is true that he has been declared officially bankrupt here and is not even allowed to have a bank account 3. Whether it is true that when he came to Germany to seek political asylum, he lied to the German authorities that he was a policeman in Ghana. From the rejoinder of the Embassy, he lied about how much the Embassy is paying for the containers, among the many lies he has been spreading about the Embassy. His allegations of corruption against the Embassy staff are all false. The people at the Embassy are doing a very good job under very difficult circumstances. Go there and the way they struggle in the heat and small space of the container to serve everyone makes me wonder how many people will accept to work so hard in such circumstances in Europe. Even in Ghana, people don’t do government work in containers. Last weekend, I attended a funeral here in Hamburg where people were praising the Embassy people for their politeness, hard work and the efficient way they handle the people who go there for passports, visa, and others. That, plus my own knowledge of them is what has made me to write this article. Mr. Rao, if you don’t like them at least don’t spoil their good names and good work with your lies because all of us will suffer for it. The Embassy belongs to all of us. But one thing Rao said is true. The container is a disgrace to all Ghanaians here. People blame the Embassy staff for it, but I hear it is not their fault. The rumour is that a businessman in Accra called Mr. Asiedu who has connections with the NPP was made to be the supervisor of the work on the Embassy building and that he is the one who has caused the delay in the work. There are rumours that he has not paid the contractor, which is why the work has been suspended for four months now. According to the rumours spreading here, the contractor herself (a lady) confirmed this to some concerned Ghanaians who used the information on the big construction signboard in front of the Embassy building to trace her. Ghanaians in Germany want the Embassy or the government to tell us what is happening because this is supposed to be the era of zero tolerance for corruption and people have gone to prison for CAUSING FINANCIAL LOSS TO THE STATE. What about this Asiedu man? Isn’t every day spent hiring the containers a financial loss to Ghana? Or he won’t go to prison because he is an NPP man? What about the disgrace Ghana is suffering here because of its container Embassy? We want the government to know that many of us here are NPP supporters and we hate to hear people condemning our government because people are saying that even in the time of the corrupt NDC government, a disgrace like this did not happen. We want President Kufuor to investigate this container disgrace and take action before it is too late. President Kufuor, please tell us the truth about why our Embassy has remained in a container all this time. Most important, we want the Embassy to move out of the container NOW. The more you delay, the more you give chance to opposition people and mischief makers like Rao to throw dirt at your government and the hard working people at the Embassy. They deserve to be praised and rewarded, not condemned for something which we hear is not their fault. Kofi Asante Awuah Hamburg. Views expressed by the author(s) do not necessarily reflect those of GhanaHomePage.