Destroying South East: Task that must be Accomplished, Gospel of IPOB,ESN,UGM 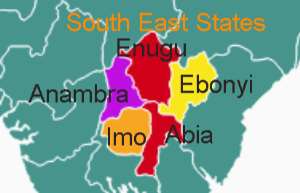 The task of destroying South East Nigeria, and reducing it to Afganistan, is a task that must be accomplished according to the gospel of enemies of Ndigbo using IPOB,ESN, Unknown Gunmen UGM and different IPOB splinter groups who have vowed to actualize Biafra whether Nnamdi Kanu is released or not.

I saw this task of destroying South East gather momentum since July 2020, and have warned Igbo leaders, clerics and government officials to take steps to initiate a dialogue with the brainwashed youth before South East is turned to Afghanistan.

During the Endsars Protests of October, 2020, I led many veteran Igbo Activists from State to State visit and warned the rampaging IPOB Commanders not to hijack the process, and use it against the state.

I know what we told many IPOB Commanders in Enugu, Abakaliki, Owerri, Umuahia, Nnewi, Awka and Aba. We told them in many fora that the Endsars is a Youth Outrage against a Rogue Nigerian Police Malfeasance, and IPOB should not hijack it for other purposes. With all fairness to many IPOB leaders in many places, they listened to us and stopped the carnage initiated by them especially in places where we identified ourselves and engaged them, citing superior arguments.

However, At Aba we met the most stubborn set of IPOB Commanders. They told us that they will march to Obigbo, link with the local chapter and sack the Hausa community and Governor Wike. Against our counsels, they embarked upon the infamous Obigbo trip, and by the time the casualties were counted, about six soldiers, four Hausa Traders and over eighty two Igbos of Biafran descent were killed in the infamous massacre ordered by the government. Over six hundred Igbos of Biafran descent were arrested and incarcerated in various prisons especially in Abuja and Niger States over crisis they know nothing about.

The Owerri Jail Break of Easter Eve 2021 did not get us napping. We warned stakeholders and key Igbo leader of impending jailbreak, and we asked the separatists not to get involved, because politicians will settle themselves, while the separatists will be slaughtered like fowl. We also warned key stakeholders of the impending attacks at Zone 13 Ukpo, Anambra State. By the time the attacks came, many persons were arrested, killed, incarcerated to the level that at one point over One Hundred and Seventy 170 corpses were abandoned at Federal Medical Centre Owerri, mostly innocent Igbos , who knew nothing about the jailbreaks and attacks on police barracks.

The Emene Massacre did not go without our warnings to those who have turned the school into a training ground for separatist activities. We cautioned as early as July 2020 that they should act discreetly, and not advertise the separatist agitations in Emene because one day innocent persons will be massacred. On the 23rd of August, an altercation between the DSS, Nigeria’s Secret Police and the separatists led to the massacre of over twelve persons and two DSS personnel, while dozens were wounded.

I have variously warned Igbo leaders, including some of them that visited Buhari recently, to plead for Nnamdi Kanu, that soon the Unknown Gunmen will engulf the South East if it is not tamed. I even initiated attempts to galvanize all veteran Igbo activists to call them for open negotiations. The Igbo elites dismissed the idea and blamed the Hausa-Fulani for the UGM phenomenon while the Governors initiated fruitless Igbo Leaders Meetings where they just sermonized to the assembled clerics and traditional rulers. The elites claimed UGM is also fighting for Igbo interests. They encouraged UGM and even when we asked some of them to call their various leaders and sponsors for debriefings; they claimed that Buhari deserves being destabilized by UGM.

The IPOB, ESN and UGM mob actions continued until they started killing high profile citizens. By the time Dr Chike Akunyili was murdered, and two traditional rulers in Owerri, the Igbo leaders, elders and elites woke up to a monster. With Anambra elections being threatened by the IPOB, ESN and UGM, the Igbo elites, sensing a foreboding of self inflicted bloodshed, ran up and down like scrotal sack to force IPOB to rescind their ‘no election’ order. Every Igbo group that pampered the malfeasance, were breathing and threatening IPOB over Anambra elections. Politicians were singing Nnamdi Kanu’s praise in order for their followers not to be attacked on Election Day

By the Grace of God, and numerous pressures mounted, IPOB, sensing implosion, cancelled the One Week sit at Home Order, and politicians heaved a sigh of relief.

The problem is that there is no relief in sight. IPOB have broken into different splinter groups, and these splinter groups are neither interested in Nnamdi Kanu, Kalunta Lanu, Emma Powerful, Chika Edozien, Alloy Ejimakor or Ifeanyi Ejiofor. These splinter groups see them as betrayers of the Biafran cause. They have variously accused them of collecting various sums, ranging from N5 billion to N500 million naira to betray the Biafran cause, despite no concrete evidences to back up their claims except some unsubstantiated whatsapp and facebook posts.

These splinter groups, according to our intelligence, will strike variously during the yuletide, engage security agents and perceived enemies of Ndigbo, and if the insecurity becomes tensed, they will make a public declaration of Biafra, and gather public sympathy.

I have asked Igbo elites on the eve of Kanu’s November 10TH arraignment in a releas titled ‘Amended Charges: Buhari to Give Nnamdi Kanu Soft Landings’ I revealed that;

“President Muhammadu Buhari has given the leader of Indigenous Peoples of Biafra IPOB Mazi Nnamdi Kanu soft landings with the flimsy amended charges brought before Justice Binta Nyako by the office of the Attorney General.

“Sources within the presidency conversant with the case of Nnamdi Kanu and our efforts to secure a pardon for him and all Biafrans detained over secessionist agitations, told me that Buhari sees Nnamdi Kanu as a talkative without home training, and does not deserve his attention.

“I was informed that the seven count amended charges was deliberately construed by the office of the Attorney General whereby Nnamdi Kanu is not accused of any act bordering on murder, and where incitement was mentioned, it was not linked to the death of anybody.

“The purpose of the flimsy charges is to make it easier for Nnamdi Kanu to get bail, if his counsels understand the game plan, and stop all the statements of unnecessary vituperations

“I counsel the solicitors to Nnamdi Kanu to caution the numerous IPOB faithful over uncouth language and activities capable of overheating the polity. The flimsy charges against Nnamdi Kanu is not a sign of foolishness by Buhari as IPOB High Command had erroneously suggested and gloated about, it is a judicial soft landings in response to the efforts of many persons to secure a political solution to Nnamdi Kanu’s case, including my efforts, our efforts as a group, and that of some prominent Igbo leaders whom we encountered while covertly seeking solution to Kanu’s case

“However, if IPOB faithful continue in acts of indiscretion, killing of security agents, and enforcing the Sit-at Home Order in a bloody and violent manner, the Nigerian Government will jettison the judicial soft landing and send him to jail”.

Two days after my piece, Nigeria’s Attorney General, Malami echoed the path of political solution, and two weeks later Buhari accepted to see a delegation of Igbo leaders and acceded to the demands of Igbo elders led by Mbazulike Amechi for the political solution to Nnamdi Kanu. Thus we work with superior intelligence, but the IPOB lawyers, instead of listening to our publicized advise, approached the court with a combative posture on November 10th, staged an unprofessional walkout, and got Nnamdi Kanu sentenced to two months adjournment.

Many Igbo groups who are intellectually inclined, including Igbo Mandate Congress IMC , Ohanaeze Integrity Groups IOIG, Igbo Think Tank ITT , General Assembly of all Igbo Christian Organizations and Ministers GAAICOM have variously asked stakeholders to initiate a debriefing of the irate youth of the South East, settle the aggrieved boys from security votes of governors, and stem the tide of UGM, but the elders running about now like scrotal sack , thought that UGM attacks and destruction of the South East will sack Buhari from Aso Rock.

There is a task of destroying South East, and turning it into Afghanistan, is a task IPOB, ESN,UGM set to do with the cheering of Igbo leaders, elites and elders, now the spirit of the movement have entered the splinter groups coming out of IPOB using different names, Biafra National Guard, Angry Vipers and many others not interested in any publicity, are all preparing for a showdown with both the security agents and Igbo elites and politicians. Northerners in the South East will not be left out.

By the Grace of God , we shall continue all our efforts to dialogue with the angry separatist youth, but if all these overtures fails, Igbos should be prepared for the destruction of the South East.

The only thing that will stop South East from being turned into Afghanistan War Zone starting from Yuletide Season is either the release of Nnamdi Kanu or the settlement of the separatist IPOB with their share of Biafran Cake from the security votes of the Confused Governors of the South East. The task of destroying South East is nearing explosion stage and I will continue to Pray to God and Engage the angry youth that this Cup Will Pass Over Us in Jesus Name.

(Rev Obinna Akukwe , Director General of Igbo Mandate Congress , is releasing this piece by the authority of some Veteran Igbo Activists and Groups who are concerned about the gradual Afghanistanization of Igboland [email protected] ,)