By Pierre Donadieu with Aly Ouattara in Tengrela
Ivory Coast 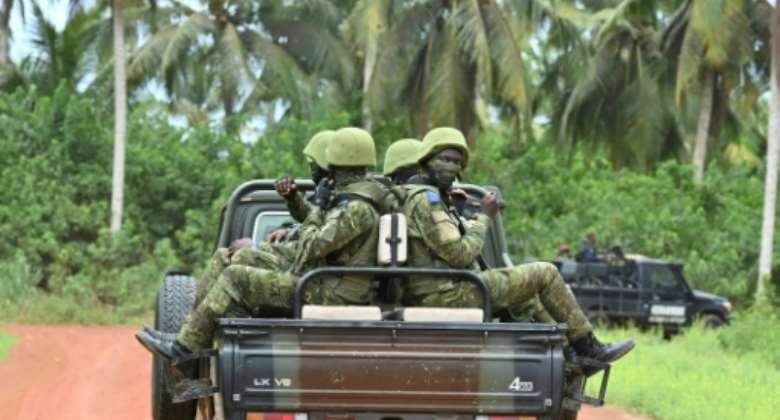 Jihadists have carried out several bloody cross-border attacks in Ivory Coast in the past two years. By Issouf SANOGO (AFP)

Ivory Coast is beefing up military deployment on its northern border and seeking stronger security ties with its neighbours as it casts a worried eye on burgeoning jihadist violence in the region.

The West African state lies to the south of Mali and Burkina Faso, which are struggling with a years-long insurgency that has claimed thousands of lives and driven hundreds of thousands from their homes.

Over the past two years, jihadists have carried out several bloody cross-border attacks in Ivory Coast, including a raid in Kafolo in the northeast in June 2020 that killed 14 troops.

Kafolo lies close to the Comoe National Park near the Burkina border -- a vast forest of 11,000 square kilometres (4,250 square miles) used as a bolthole by jihadists, many of whom are linked to Al-Qaeda, security sources say.

In Tengrela, a town farther west near the border with Mali, the army have set up a special forces base, and convoys of trucks are a daily sight.

"We are glad to see the special forces among us -- we know that we are safe," said Zie Coulibaly, a local driver.

"We are reassured that the troops are there, but if they could send more, we would be happier," said Kone Zoumana, head of a cooperative of gold miners.

"Forces have been stepped up in the northern zone and the state is deploying every means to secure the northern border," Prime Minister Patrick Achi has said.

The jihadist threat in the Sahel region to the north of Ivory Coast first emerged in northern Mali in 2012.

Several years later, it spread to the country's powder-keg centre and then to Niger and Burkina Faso.

"The terrorists' goal is to extend their religious, cultural and economic grip as far south as possible," said Fidele Sarassoro, chief of staff to Ivorian President Alassane Ouattara.

Map showing zones of influence by armed groups in the Sahel. By (AFP)

The government's policy of more boots on the ground goes in parallel with a push to strengthen security cooperation with Mali and Burkina, and beyond.

"Burkina Faso and Mali today are the epicentre of the terrorist threat, which is moving southwards towards Ivory Coast. The government has every interest in working closely with those states," said Lassina Diarra, a specialist in jihadism.

France and the United States have also pitched in.

A French-backed centre to train soldiers, police and the judiciary in the fight against "terrorism" was inaugurated in June in Jacqueville near the Ivorian economic hub Abidjan.

The United States has stumped up $19.5 million for a five-year programme to help combat the allure of extremism for young people in border regions.

But, say experts, whether jihadism takes root among youngsters in northern Ivory Coast can depend greatly on the economy.

The government insists that it is carrying out programmes in the vulnerable north to spur job creation.

But analysts differ, saying the authorities' approach to the jihadist threat is overwhelmingly military.

"Terrorist groups play on social dynamics, on the state's structural deficiencies," said Diarra, who also criticised "racketeering" by security forces in the region.

"Other approaches are needed to avoid the country failing, as we have seen in Burkina Faso."