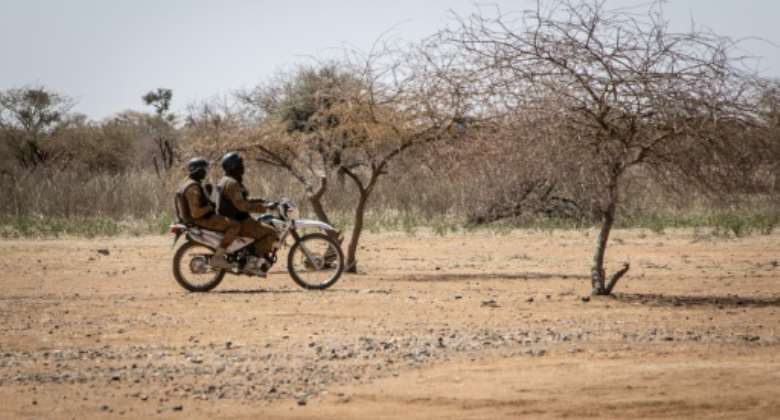 The Inata attack was the deadliest on the defence and security forces since the jihadist rampages began in 2015. By OLYMPIA DE MAISMONT (AFP/File)

A jihadist attack on a base in northern Burkina Faso this month that left at least 57 dead has turned the spotlight on glaring failures by the security forces to protect themselves against a ruthless, highly mobile foe.

On November 14, more than 300 fighters aboard pickups and motorcycles stormed a gendarmerie camp at Inata, according to military sources.

The latest official figures on Monday said 53 police and four other people had been slain -- the deadliest toll among security forces in the six-year-old insurgency.

Around 150 gendarmes were stationed at the camp. So far, only 47 survivors have been found.

On Sunday meanwhile, nine gendarmes and about 10 civilians were killed in an attack on their base at Foube, also in the desert north, security sources say.

Raids by armed groups affiliated with Al-Qaeda and the Islamic State group have plagued the landlocked Sahel nation since 2015, killing about 2,000 people and displacing 1.4 million from their homes.

'The army has no control'

Pending the findings of an inquiry, the government stripped two military commanders in the northern sector of their posts.

The Inata gendarmes had been waiting for relief for several days and they appealed for help shortly before the assault. By MICHELE CATTANI (AFP/File)

"That we are still looking for survivors is the very sign that the army has no control of the territory, or that it refuses to accept evidence of a heavier toll," said Drissa Traore, a political analyst in Ouagadougou.

According to Loana Charles Ouattara, a retired senior officer, "the Burkinabe army has a serious structural problem -- the top officers are all at headquarters while the country is at war."

Ouattara said small groups of soldiers scattered across the northern region "wait in vain" for reinforcements.

"Either there's a logistical problem or the relief force does not even exist -- and as a result, we had the tragedy of Inata," he said.

"We really need to review the size of army units so as not to be cornered in situations like Inata where the soldiers, deployed in small detachments, are attacked by enemy troops two to three times as large," he added.

The Inata gendarmes had been waiting for relief for several days and they appealed for help shortly before the assault, saying they were running out of ammunition and food.

This attack "is certainly the most shameful, the most humiliating and the one which lays bare our inadequacies as a state," said Labour Minister Benewende Stanislas Sankara.

Thousands of protesters held up a French military convoy in several Burkinabe towns as it was transiting the country to reach Niger from Ivory Coast. By MICHELE CATTANI (AFP/File)

Guy Herve Kam, a well-known lawyer active in grassroots groups, said the armed forces were "unprepared strategically, tactically, humanly and logistically... As a result, the same causes induce the same effects -- the same tragedies, the same grief, the same bafflement and the same anger".

Outrage at jihadist violence and the powerlessness of the army has frequently spilled over into demonstrations across the country.

Many accuse former colonial power France of being incapable of eradicating jihadists in the Sahel nations where French soldiers have been operating since 2013, or even of being complicit with the armed groups.

Thousands of protesters held up a French military convoy in several Burkinabe towns as it was transiting the country to reach Niger from Ivory Coast.

A retired officer pointed to 'a serious structural problem, with staff officers all stationed in headquarters while the country is at war'. By ISSOUF SANOGO (AFP/File)

"In our army's chain of command, some people have failed," Kam said.

"The troops fight on the ground but they are often abandoned to their fate."

For Labour Minister Sankara, Burkina Faso "must restructure the army, take the strongest measures, entrust operations to young officers who have proven themselves".

Highly trained officers "have still not found the right answer to these attacks", Kam said. "Is this incompetence, a lack of loyalty or complicity with the enemies of our people?"