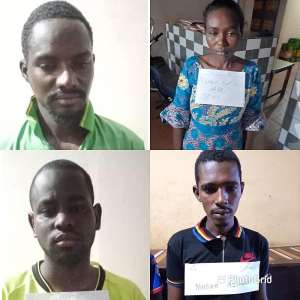 The Police in Ejura in the Ashanti Region have arrested five people including a 14-year-old for engaging in highway robbery in the Ejura Sekyedumase Area.

In a statement from the Ghana Police Service on Tuesday morning, it has disclosed that the suspects Ajara Sagu, Rashid Ibrahim, Ibrahim Iddrisu, Musah Arijuma were arrested at Ejura after extensive Police surveillance on their activities together with the juvenile.

The gang of five has been engaging in robbery activities on highways linking Nkoranza and Techiman in the Bono East Region and the Ejura Sekyedumase Municipal area of the Ashanti Region.

They have in the past managed to rob commuters of cash and their belongings as well.

Through the hard work of the Police in Ejura, they have been arrested and identified by one driver whose car was attacked recently.

“A driver who was a victim of the suspects' robbery expedition along the Techiman-Ejura Highway, during Police investigations, identified all the four suspects and the juvenile as the robbers who attacked him on November 15, 2021, at Adiemra.

“Other victims have also come forward to identify these criminals and their stolen items,” the statement issued by the Ghana Police Service has said.

Other items suspected to have been robbed from commuters and retrieved from them included one unregistered Apsonic Aloba motorbike and an amount of Two Thousand, Two Hundred and Seventy-Nine Ghana Cedis (GHC2,279.00).