I don't detest Mahama as a human being, I rather hate his politics 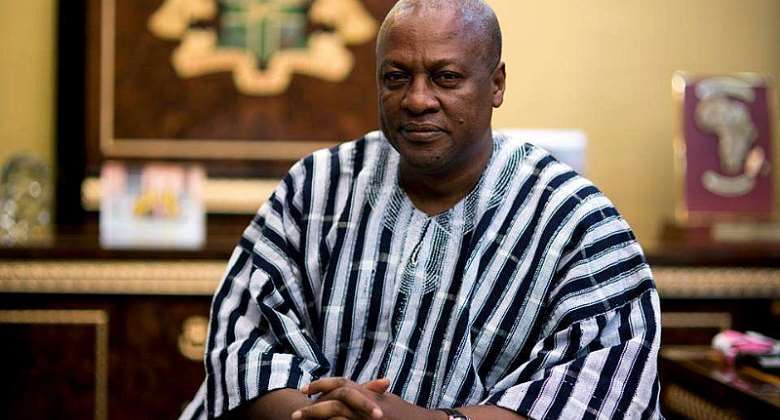 Of course, His Excellency former President John Dramani Mahama has many unrepentant critics. I, in particular, as a matter of principle, have been an impenitent critic of Ex-President Mahama over the years.

That being said, I am not the Lucifer in his flesh, far from it. The point of departure, though, has always been the political ideology.

And, in spite of our divergent views on political ideology, I cannot deny or ignore the fact that the former president contributed his bit towards the nation building.

I cannot also stand accused of harbouring inherent and risible proclivity for suggesting somewhat passionately that there are not many patriotic Ghanaians who will shrill and thrill over the return of Ex-President Mahama with the exception of the diehard supporters who probably laid hands on big chunks of the national cake, ostensibly, shared unequally by the former president.

It would appear that the Mahama’s praise singing bandwagon never experienced the harsh socio-economic standards of living their ‘redeemer’ Mahama wilfully brought upon the nation. So what do you expect? They will definitely clamour for the return of the spoon that over fed them.

If you may recall, during the NDC’s 2019 flagbearership contest, the other potential presidential aspirants emitted vehemently and inexorably that former President Mahama was the main reason why NDC lost the 2016 election.

Unsurprisingly, however, a multitude of concerned supporters within the NDC were in solidarity with the other aspiring flagbearers.

The aggrieved supporters uncompromisingly ventilated their illimitable indignations over the comeback of former President Mahama.

Bizarrely, while the sceptics were insisting that Mahama was not up to the task during his tenure in office and must therefore be replaced with a much more capable flagbearer, the Mahama loyalists were moving heaven and earth to have him back as the party’s next presidential candidate.

To be quite honest, some of us were extremely surprised to get our heads around how and why anyone with reflective thinking prowess could aim accusing fingers at the critics for insisting that Mahama kept his eyes off the prize and therefore didn’t warrant another chance at the presidency.

In as much as former President Mahama commands some respect among the NDC foot soldiers and a section of ordinary Ghanaians, the sceptics were absolutely right in doubting Mahama’s 2020 electoral chances.

Thus, it came as no surprise to some of us at all when a group of organisers within the opposition NDC urged the National Executives of the party to allow Mr Alban Kingsford Sumana Bagbin to go unopposed in the party’s 2019 flagbearership contest (See: Alban Bagbin must go unopposed – NDC organisers; ghananewsagency.org/ghanaweb.com, 12/03/2018).

“So many people in the party feel Hon. Bagbin is the best person to lead us into 2020 and the reasons are pretty clear: he is the exact contrast to former President John Mahama in the matter of marketability and yet retains the Northern extraction that will satisfy the need to have a Northerner complete an eight-year mandate.”

Back then, the spokesperson for the group insisted vehemently that since corruption was going to be a key campaign theme in 2020, and the fact that former President Mahama administration had issues with corruption, Ghanaian voters would be forced to reject him if he was to be elected as the next flagbearer.

In fact, it was not only the aggrieved NDC organisers who expressed concerns about the unbridled corruption in the erstwhile Mahama administration.

The NDC founder and the former president of Ghana, J. J. Rawlings of blessed memory audaciously came out and disclosed that the corruption in the Mahama administration was so pervasive to the extent that a former NDC minister licentiously bought two luxurious mansions worth at a staggering $3 million from an estate agent in Accra shortly after the Mahama’s government exited power (see: ‘NDC minister grabs two mansions’; dailyguidenetwork.com, 12/06/2018).

Besides, prior to the NDC’s 2019 flagbearership contest, the Speaker of Parliament, Bagbin, the former MP for Nadoli Kaleo and contestant of the NDC’s presidential race, attributed the humiliating defeat of Mahama and the National Democratic Congress (NDC) in the 2016 general elections to bad governance amid gargantuan corruption (See: ‘Mahama's boys bought V8, built mansions in 4 years – Bagbin; myjoyonline.com/ghanaweb.com, 19/08/2018).

To be quite honest, some of us struggled endlessly to get our heads around as to how and why any real patriot would seek the return of someone who disastrously collapsed the country’s economy to the detriment of the poor and disadvantaged Ghanaians.

Why did the Mahama loyalists think that every single Ghanaian was oblivious to the happenings in the country prior to the 2016 general elections?

The fact of the matter is that the diehard NDC supporters were living in a denial about the harsh economic conditions prior to the 2016 general elections.

In fact, one cannot help but to agree with those who insist that former President Mahama lacks effective leadership skills.

The sceptics would argue that it was due to former President Mahama’s poor leadership qualities that a GH9.5 billion debt in 2009 rocketed to an incredible GH122.4 billion in just five years with a little to show for.

Besides, the critics have been maintaining that former President Mahama’s dreadful errors in decision-making accounted for Ghana’s economic downslide.

Somehow, Ex-President Mahama’s decision-making came under sharp scrutiny when he abysmally dragged an economic growth of around 14% in 2011 to a nauseating 3.4% as of December 2016.