US praises Morocco plan on Western Sahara as tensions rise 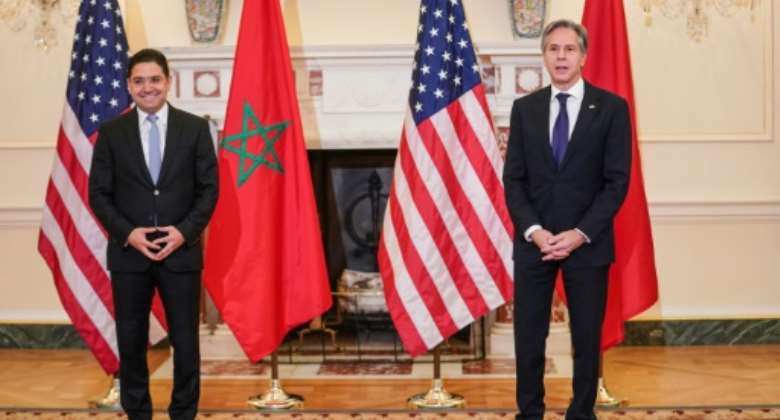 US Secretary of State Antony Blinken (R) and Morocco's Foreign Minister Nasser Bourita stand side by side as they address the media at the State Department. By SARAH SILBIGER (X06988/AFP)

US Secretary of State Antony Blinken offered praise Monday for Morocco's proposal on Western Sahara, marking fresh support despite rising tension over the territory with Algeria.

President Joe Biden's administration has sought to sidestep over discussion of the sovereignty question but has left Trump's decision in place.

Blinken "noted that we continue to view Morocco's autonomy plan as serious, credible and realistic, and one potential approach to satisfy the aspirations of the people of Western Sahara," State Department spokesman Ned Price said.

Morocco overran 80 percent of Western Sahara after Spain's withdrawal in 1975.

A UN-brokered ceasefire deal in 1991 envisaged a UN-supervised self-determination referendum with all options on the table, but Morocco has rejected any vote that includes a choice of independence and has only offered limited autonomy.

Algeria supports the independence movement, the Polisario Front, and has insisted that Washington's position has no effect, with the United Nations not recognizing Moroccan sovereignty in the region.

Tensions have risen in recent months, with Algeria cutting diplomatic relations with Morocco and earlier this month accusing the kingdom of killing three Algerians on a highway through Western Sahara.

Blinken, in brief remarks to reporters, called Bourita's visit "timely" due to the recent United Nations appointment of veteran diplomat Staffan de Mistura as the envoy on the Western Sahara conflict.

He was the 13th person floated for the job and was initially rejected by Morocco until, diplomats said, the United States pressured the kingdom to accept him.

Western Sahara is sparsely populated and largely desert but has mineral reserves and access to prime Atlantic fisheries. It also provides a potential trade route between the Arab kingdom and West African markets.