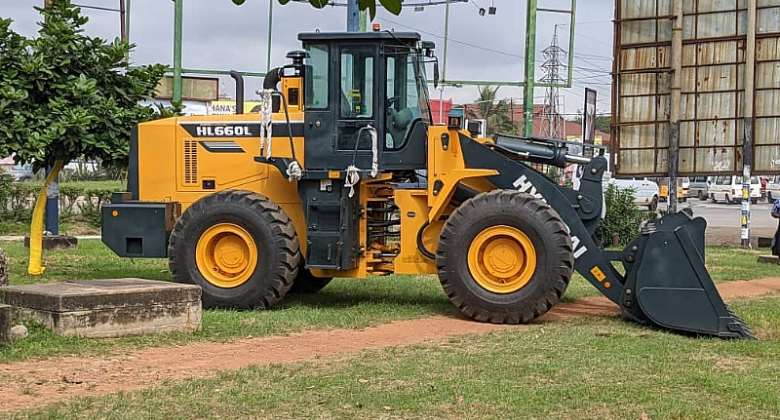 The National Consultative Council for Sand and Stone winners, including the Truck Drivers Associations of the Progressive Transport Owners Association (PROTOA) and Ghana Private Road Transport Union (GPRTU) over the weekend launched a multipurpose wheel loader equipment worth over $72,000.

The occasion which attracted high profile personalities from the various business communities, was also graced by some officials from M/s J.A. Pool Ltd, a company which sold the facility to the sand and stone operators.

Speaking to the ModernGhana News correspondent in an exclusive interview in Kumasi after the program, the National Chairman of the Association, Nana Adomah Baffour reiterated that the rationale behind the acquisition of the new earth moving machine was among others, to increase the production of sand and stone, revenue generation and job creation for the youth.

Nana said the Association has been in existence since 1991 with the active involvement of the PROTOA and GPRTU truck drivers Association.

According to him, the decision to buy heavy-duty equipment to speed up their operations was on their agenda already but the outfit was constrained by financial challenges.

The chairman hinted that he decided to buy the equipment for the Ashanti Regional branch of the Association after he realized that the branch has something in its bank accounts that could be used for credit negotiation.

"It was through this decision where l contacted M/s J.A.Plant Pool Ltd for arrangements leading to the purchase of the machine, the company accepted 50o/o cash down basis on its credit terms," he stated.

Nana Adoma Baffour noted that the machine though a property of the Ashanti Regional branch of the Association, functions cover every part of the country.

He took the opportunity to appeal to the financial institutions in the country to consider entering into a partnership to acquire more machines to enable them operate profitably.

Earlier in his short address, the National Chairman for GPRTU Nana Nimako Bresiama advised the machine operators to take good care of its usage to ensure its long life pan.

Nana urged management to use the proceeds from the facility to settle the remaining debt to enable the company have confidence in them for future credit facilities.