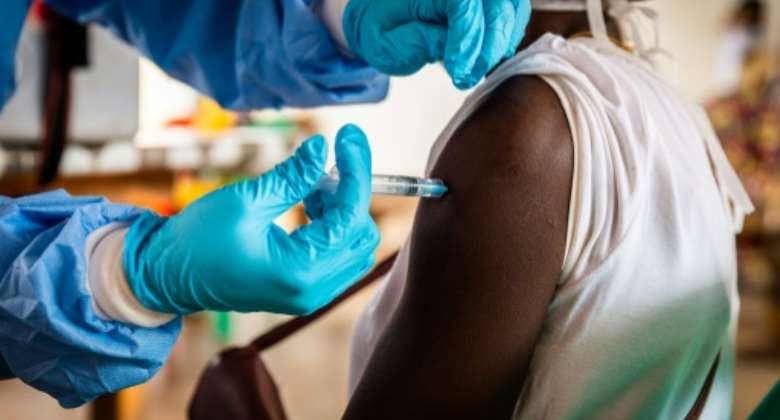 A Covid vaccine shot is administered in Bimbo, Central African Republic, where just seven percent of the population is inoculated. By Barbara DEBOUT (AFP)

Marie-Chantal grumbles "only because I was asked to" before rolling up her sleeve for a Covid-19 vaccine shot.

She is about to become one of the seven percent vaccinated in the Central African Republic, which is fighting not just to convince a sceptical population to get the shot, but to obtain doses in the first place.

While wealthy countries roll out third booster shots, many in Africa are still waiting for their first, including in CAR, which is ranked as the world's second least-developed nation by the UN and is still suffering after a brutal civil war erupted in 2013.

In the muggy heat of a small hospital in Bimbo, on the outskirts of the capital Bangui, Marie-Chantal and some 10 others were convinced to get jabbed.

Some organisations have fought to raise coronavirus awareness in the country, such as the Alliance for International Medical Action (ALIMA), which mainly operates in Africa and conducts vaccination campaigns in remote areas.

Grevisse Kahindura, ALIMA's Central African vaccination coordinator, said that "at the beginning people were reluctant, so we relied on community support to convince them".

The hospital's facilities are basic. Wearing blue scrubs and protective glasses, nurse Larissa Tongoma put on gloves before picking up a dose of the one-shot Johnson & Johnson vaccine. The label bearing a red cross was dusty and worn.

While wealthy countries roll out third booster shots, many in Africa are still waiting for their first. By Barbara DEBOUT (AFP)

"I have vaccinated 43 people today," the nurse said as she disinfected the arm of Prince, 28. She then injected the dose and told him to join a nearby group to watch for any immediate side effects.

The hospital's chief medical officer Petula Mandaba said that "a lot of people do not believe in the existence of the coronavirus".

"During the awareness campaign we found a village where the pastor had said Covid was made up. It was impossible to convince residents to get vaccinated."

ALIME's African medical manager Melanie Tarab said that across the continent vaccine scepticism is felt "almost everywhere, although it differs from one country to another".

"It is more difficult to vaccinate in urban areas, where people have access to fake news on social media, than in rural areas," she added.

On the streets of Bimbo, there is little sign of the pandemic. Masks are required to enter official buildings in the capital Bangui, a few kilometres to the north.

The World Health Organization's coordinator in Bangui, Richard Fotsing, said the health ministry has distributed two million masks, but "nobody wears them".

Only 12,000 Covid cases and 101 deaths have been officially recorded out of the Central African Republic's population of nearly five million, but the true numbers are likely higher.

CAR is ranked as the world's second least-developed nation by the UN. By Barbara DEBOUT (AFP)

"The Covid statistics that do come back are only from health centres," Fotsing said.

"We don't have a system for reporting when a death occurs in a community, so it's possible that people think it was malaria or flu."

Covid numbers have been generally lower in Africa than most other regions during the pandemic, partly a result of a lack of testing which ALIMA's Tarab said "hampers adherence to vaccination".

Prince said he was happy he got vaccinated this time -- he had previously come to the Bimbo hospital only to leave empty-handed because "the doses were missing".

Kahindura said "we know we have to vaccinate 37,000 people in Bimbo," adding that ALIMA, supported by the health ministry, had already vaccinated nearly 23,000 people in the country.

The WHO estimated in September that Africa was facing a shortfall of 470 million vaccine doses. By Barbara DEBOUT (AFP)

Tarab said that doses were "arriving in dribs and drabs" in Africa's most remote corners.

"And when the doses arrive, they are often close to their expiry date, making it difficult to organise a second injection," she added.

The WHO estimated in September that Africa was facing a shortfall of 470 million vaccine doses.

"Less than seven percent of the African population is vaccinated," Tarab said, noting that countries in northern and southern Africa inflate the average.

Back in Bimbo, Prince is rubbing his shoulder.

"Like everyone else, I was afraid," he admitted -- adding that he now felt reassured.