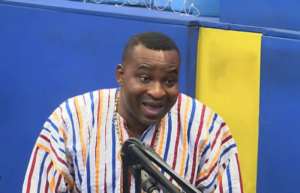 The Ashanti Regional Chairman for the governing New Patriotic Party, Mr Bernard Antwi Boasiako, popularly called Chairman Wontumi, has described as false publication that the party is owing rent and for that reason, the landlady had stormed the regional headquarters to close it down.

Addressing a press conference today, Monday, 22nd November 2021, the communication unit of Mr Wontumi’s 2024 campaign team said it met with the property owners who affirmed that the party does not owe rent.

Mr Boateng indicated that some people who want to contest Chairman Wontumi orchestrated the false claim together with the nieces of the landlady in a bid to get at him and make him appear incompetent and unpopular as the party’s internal elections approach.

Mr Boateng said the party executives have commenced investigations into the matter to unravel those behind it.

One confirmed dead in youth, Police clash at Kotobabi Market
35 minutes ago