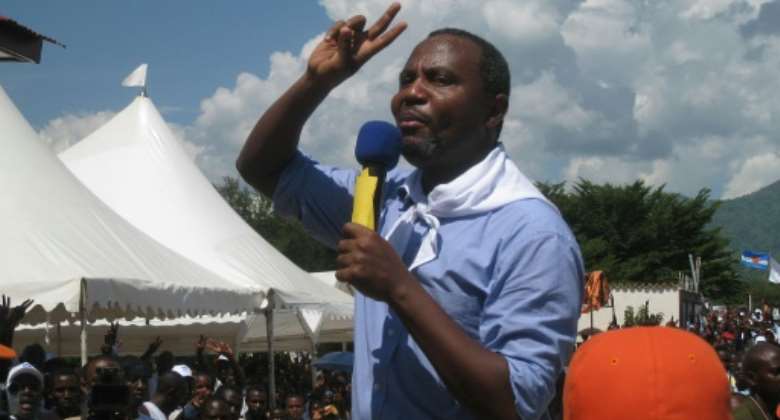 Alexis Sinduhije, pictured in Bujumbura in 2010, says he has had six arrest warrants issued against him. By Esdras Ndikumana (AFP/File)

A high-profile Burundian government critic has lashed out at the US government for lifting sanctions against his country, saying nothing had changed to justify the move.

Washington last week removed the sanctions that were imposed six years ago, crediting elections, a fall in violence, and reforms by President Evariste Ndayishimiye.

"It is surprising that such a powerful country can look at the issue of Burundi with very simplistic eyes," Alexis Sinduhije, leader of the opposition Movement for Solidarity and Democracy (MSD), told AFP.

"Citizens die every day, human rights reports talk about it, observers who are on the ground... they know," Sinduhije, 45, said in an interview.

"So I don't see what has changed in Burundi except through the eyes of the Americans themselves."

The former journalist, who now lives in exile in Belgium, is one of the fiercest opponents of the state and has long been a divisive figure.

He featured on Time magazine's list of 100 most influential people in 2008 and was honoured in 2004 by the Committee to Protect Journalists for setting up Radio Publique Africaine, which sought to promote peace between ethnic Tutsis and Hutus towards the end of Burundi's long civil war.

But the one-time presidential candidate also landed on the 2015 US sanctions list himself, accused of being an active supporter of armed rebellion in the tiny Hutu-majority country.

Sinduhije described his initial blacklisting by Washington as "unjust", saying his Tutsi ethnicity may have played a role to "balance" the Hutus on the list.

The US decision came just two months after a UN Commission of Inquiry said the human rights situation in the central African country had "deteriorated" since Ndayishimiye took power in June 2020.

"Members of opposition parties... are still regularly targeted by abusive restrictions and are subject to grave human rights violations such as disappearances, arbitrary arrests and detentions and torture," the UN said in September.

That same month, Burundi issued an international arrest warrant against Sinduhije, accusing him of leading a group responsible for multiple "terrorist acts".

Sinduhije told AFP it was the sixth warrant issued against him by various governments in Burundi, declaring: "It is a political warrant, not a judicial one."

He is suspected by the Hutu-led government of being at the helm of RED-Tabara, the most active rebel group in the country which is accused of being behind many deadly attacks since 2015.

Sinduhije has always denied the claims.

But he told AFP he was in contact with RED-Tabara, as with "all those who are fighting against the regime".

"The line is very simple, our party demands the negotiation of an electoral process that is inclusive and cannot be rigged," he said.

"To associate me with RED-Tabara, I think it's a way to exclude me politically," he said, but added: "I always want to discuss with them, politically I want a debate.

"These people are heroes to me, they are not terrorists... They are fighting for the future of our country, for freedom, for people to have a choice."

He said RED-Tabara, which has a rear base in the neighbouring Democratic Republic of Congo and is believed to have an estimated 500-800 men, was gaining in strength, and present in Burundi itself.

Most recently, the group said it was responsible for a mortar strike on Bujumbura airport in September, one of a string of attacks in the economic hub that month.

Eventually, said Sinduhije, the government led by Ndayishimiye's CNDD-FDD party would have to talk to its opponents.

"Whether they want it or not, they will be forced to have dialogue."