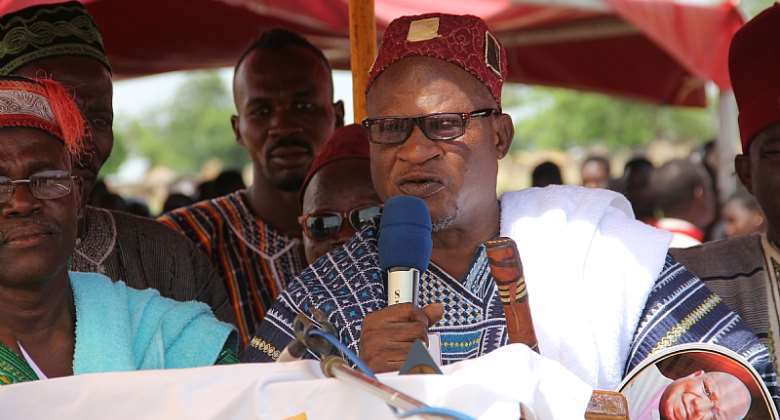 The late former District Chief Executive and Divisional Chief of Binaba, Naba Moses Abaare Appiah IV was over the weekend laid to rest at his hometown, Binaba in the Bawku West District of the Upper East Region.

The Bishop of the Tamale Bolgatanga Diocese of the Anglican Church, Right Reverend Dennis the Debukari Tongin, in a sermon, said the late Naba Moses Appiah Abaare IV lived a life worthy of emulation.

He said the late Chief contributed to the growth of the country by impacting positively on the lives of others through his rural development works.

Naba Moses Abaare died on the 27th of April, 2021 at Tamale teaching hospital after a short illness.

He was born on May 15, 1956, and until his death, he played various roles in the development of his community and the entire country.

Naba Abaare was a wise counsel, political strategist and a God-fearing man.

He was appointed the District Chief Executive for Bawku West from 2001 to 2007 under former President John Agyekum Kufour administration.

Naba Moses Abaare Appiah IV contested as a parliamentary candidate in the 2000 general elections on the ticket of the NPP but lost.

In 2005 as DCE Naba Moses Appiah used the opportunity to create the structures for the NPP in the Zebilla constituency.

His leadership style in the party was very much admired and has attracted many people to the party.

The NPP party which was not well grounded and less attractive to the indigenous at the time was now running neck to neck with the NDC party that had captured the north.