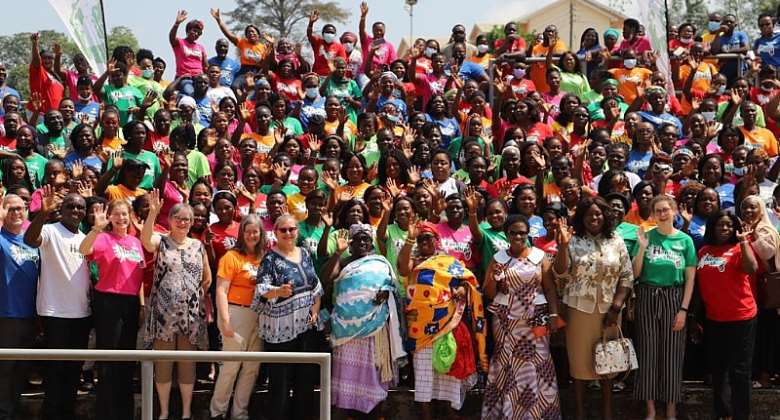 Some 225 Ghanaian women entrepreneurs have graduated from the second edition of a mentoring programme organised by Sinapi Aba Savings and Loans (SASL) at a special ceremony in Kumasi last Friday.

The mentees who are from 10 regions of the country underwent a six-month training with 75 mentors who assisted them in various trades and crafts to acquire first-hand information and experience to enhance their business development.

This brings to 375 the number of Ghanaian women who have benefitted from the programme which saw 150 graduating during the maiden graduation last year.

Dubbed “ Mentoring the Next Generation of Great Women,” the mentoring programme gives support and improvement to people, especially women in the small and medium enterprises (SME) sector to acquire the right skills to become economically empowered to contribute positively towards the nations’ economy.

Speaking at the graduation ceremony, the Chief Executive Officer for Sinapi Aba Saving and Loans, Mr Tony Fosu Gyasi, CEO of SASL, said the company was not just interested in doing business but was also in the development of the youth who are the hope of the nation.

He pledged to continue providing the needed support towards the development of more youth of the nation to complement government’s effort at reducing unemployment in the country.

The CEO urged the graduands to make good use of the skills they have acquired prudently and contribute towards the development of the country.

The Chief Programme Officer at Sinapi Aba Savings and Loans (SASL), Mrs Joyce Owusu-Dabo, said: "this program stand the chance of reducing poverty among women, especially those in the rural areas who cover about 65 per cent of our target for the project".

The institution, over the years, she noted had not only supported entrepreneurs financially but had also continuously equipped them (most of whom are their customers) with the technical knowledge to enable them sustain their businesses.

Mrs Owusu-Dabo seized the opportunity to commend the Canadian Government through its agencies; Global Affairs Canada and Opportunity International Canada for their support towards the mentorship programmes, and that the program had come to stay.

On her part, Mrs Theodosia Jackson, a Board member of SASL, charged the beneficiaries that they needed to be disciplined at all times since discipline was a key ingredient one needed to improve upon his or her business.

Some of the skills they acquired during the training were proper record keeping, planning in business, innovation and creativity in business, how to guide against fraud and stock control among others.

At the event, the beneficiaries were given the opportunity to share their successes made during the program, and how it has impacted positively in making them continue to stay relevant in their trade areas.

SASL is a leading banking financial institution in the country, which for the past 27 years has been promoting the development of businesses in the country with particular emphasis on the supporting of women in the SME sector.

The mentorship involved bringing experienced mentors from various established SME business modules to coach, mentor and share best practices with their mentees at their various workplaces across the country.

Some facets of business captured in the mentorship included trading, manufacturing, school management, agro-processing, as well as service provision, among others.

The event saw the best three mentees and mentoring teams receiving cash packages ranging from GH¢500 to GH¢1,500 and other packages.

Each of the mentoring teams were asked to submit stories about their experience during the training, after which the three winners were selected for recognition and honours.

All of the graduands received certificates for their successful completion of the programme.