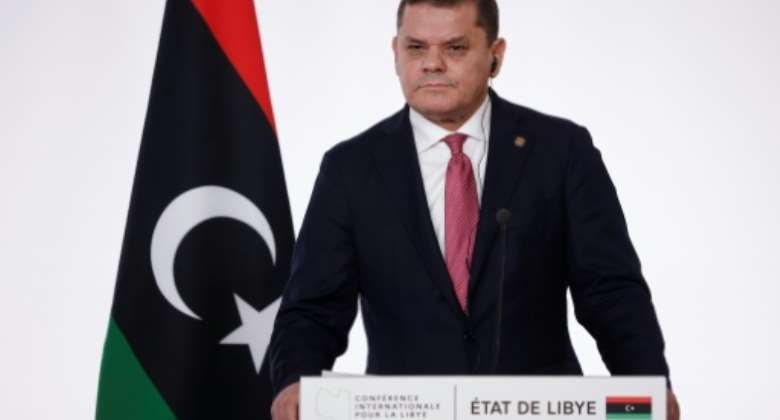 Libya's interim prime minister Abdulhamid Dbeibah who registered Sunday to stand in December presidential elections is a Canadian-educated business tycoon who has used his post to build a solid popular base.

He was elected in February under a United Nations-led peace process and tasked with leading the country up until its first ever direct presidential poll.

It was a surprise victory for a man who was once a member of the inner circle of dictator Moamer Kadhafi.

Dbeibah was born in 1959 in Misrata, a historically wealthy port that would later produce powerful militias who played a key role in and after the 2011 revolt that toppled and killed Kadhafi.

During the dictator's four-decade rule, Libya's third city underwent an industrial and economic boom from which the Dbeibah family and many others profited.

His masters degree in engineering from the University of Toronto gave him technical expertise that gained him the confidence of Kadhafi, who appointed him to head the state-run Libyan Investment and Development Company (LIDCO).

Under Dbeibah's direction, LIDCO managed huge projects including the construction of 1,000 housing units in Kadhafi's hometown of Sirte.

The father of six became one of the richest men in Misrata -- just behind his cousin Ali Dbeibah. Both have since faced investigations for suspected embezzlement.

After Kadhafi was slain by Misrata fighters in 2011, Dbeibah founded the "Libya Future" party and started his timid entry into politics.

But it was 10 years later, in February this year, that the 62-year-old was elected by fellow members of the UN-led Libya Political Dialogue Forum to lead a transitional government.

His election, marred by accusations of vote-buying, came after a landmark October 2020 ceasefire that halted the latest round of fighting between eastern and western Libyan coalitions.

The UN's efforts aimed to draw a line under 10 years of conflict since Kadhafi's demise, re-integrate divided state institutions and start the enormous job of rebuilding the country's infrastructure -- as well as oversee the departure of an array of foreign armed forces.

Oil-rich Libya has been awash with weapons since the revolution, with numerous armed groups vying for power.

Abdul Hamid Mohammed Dbeibah delivers a speech via video link during a meeting of the Libyan Political Dialogue Forum. By Handout (UNITED NATIONS/AFP)

Dbeibah has vowed to work so "weapons are placed under the monopoly of the state", but since taking office in March he has prioritised improving Libyans' living standards, battered by years of high inflation and a liquidity crisis as well as the conflict.

Despite failing to get a budget through parliament, he has tapped into separate funds for a "return to life" programme involving infrastructure projects.

His government also announced it would grant "marriage benefits" of 40,000 dinars ($8,800) each to couples who marry by the end of the year, as well as doubling public sector salaries and pensions.

He has also held regular rallies and appeared at sports events, nurturing speculation that he planned to run for president despite not quitting his current post three months ahead of the polls as required by an electoral law controversially passed in September.

Dbeibah is seen as close to Ankara and to the Muslim Brotherhood, and he heads a company with subsidiaries across the world, including in Turkey.

In September, the parliament elected in the country's last legislative polls in 2014 passed a vote of no confidence in Dbeibah's government, but instead of quitting, he held a large rally in Tripoli and announced that he would stay -- the first of a string of public appearances across Libya's west.

Earlier this month, he was received with pomp in Paris as French President Emmanuel Macron hosted a conference on stabilising Libya.

Dbeibah has also promised to set up a ministry of "national reconciliation" to woo back foreign investors and create jobs for the young, and to tackle persistent power cuts.