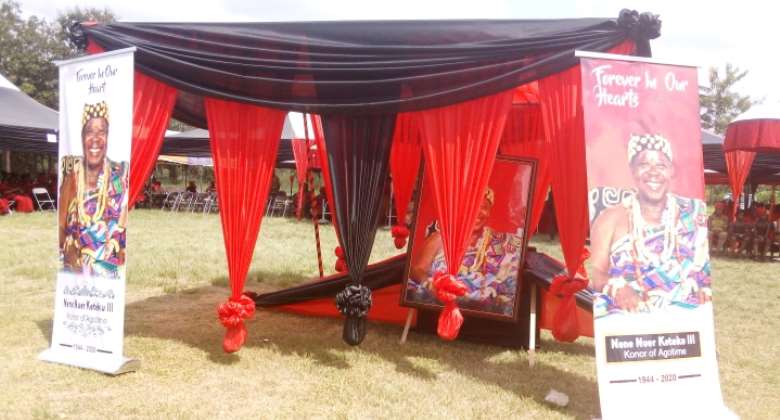 The people of Agortime Kpetoe Traditional area in the Agortime Ziope District of the Volta region have bid a farewell to their late King Nene Nuer Keteku lll on Saturday November 20,2021 at Evangelical Presbyterian park, Kpetoe.

He left behind 6 children.

The ceremony was highly attended by chiefs from Agortime Traditional Area,Togo and citizens near and far.

Nene Nuer Keteku lll, the Konor (Paramount chief) of 37 towns and villages of Agortime which straddle the Republic Ghana and Togo was known in his private life as Senyo Kofi Akuffo.

Nene Nuer Keteku lll was a decendant of the Tsotigorme sub clan, which houses the greatest Ntsrifua Paramount stool of Agortime.

The late Nene Nuer Keteku lll completed his seventh standard education at Kpetoe in the year 1954 successfully with good passes whilst he proceeded to Jasikan Training College in the year 1965 and obtained the required certificate as a trained teacher.

He was enstooled as Konor Nene Nuer Keteku lll of Agortime traditional area on October 24,1969 where he reign for 51 years untill he was called by his maker.

He taught at E.P primary from 1972 to 1978 before he was transferred to Ho L.A primary school.

He retired in the year 2004 after serving in the Ho district Education Office.

Nene also received many accolades in the roles he played in promoting "Kente",a traditional cloth in his area,through which he won the UNESCO honour for Custodian of Ewe Kente and Gold plate awarded from Ghana Revenue Authority for being partner in Trade an industry.

The late Nene Nuer Keteku lll, before his demised played an instrumental role in fight for the location of the district capital of the old Adaklu-Anyigbe district which is now Agortime Ziope district in Kpetoe.

Nene Nuer Keteku lll though occupied the great Ntsrifua stool which is noted for its mystical powers and complex web of tradition and culture surrounding it,he was a strong member of Global Evangelical Church and adhered to the ethics and principles of the church.

Reports suggesting we have accused police of 'hiding' interc...
36 minutes ago