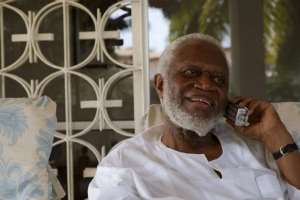 According to information gathered from sources, the retired Army Captain, who is also a founding member of the National Democratic Congress (NDC) gave up his last breath on Saturday dawn.

The sad incident occurred at a health facility in the capital where he had been admitted to receive medical care.

The death of Captain Kojo Tsikata has subsequently been confirmed by the National Communications Officer of the National Democratic Congress (NDC), Sammy Gyamfi.

“This is really sad news not just for the NDC. It is a sad news for Ghana,” he said while speaking on the Key Points on TV3 this morning.

Member of Parliament (MP) for South Dayi, Rockson Dafeamekpor who also confirmed the news of the passing of the NDC stalwart in a tweet wrote: “BREAKING NEWS!!! News is that Ghana’s Greatest Intelligence & Counter-intelligence Mind ever, Capt. (Rtd.) Kojo Tsikata has just passed away.The world is a stage indeed.....Fare thee well, uncle...."

In the past, Captain Kojo Tsikata served as the Head of National Security and Foreign Affairs of the Provisional National Defence Council (PNDC).

For his exceptional work in and outside Ghana, the deceased often earned praise and was eventually touted as Ghana’s foremost security brain

He served as a member of the council of state and a captain of the Ghana Army.

Having served as a member of the council of state of Ghana, Captain Kojo Tsikata at a point was appointed by Gaddafi to a senior advisory position in charge of the Al Mathaba central committee, a support centre for the liberation movement and anti-imperialist and anti-Zionist organisations.

His death will be mourned not only in Ghana but outside the shores of the West Africa country as well.

The tigers have been declawed, they're no longer dangerous –...
8 minutes ago