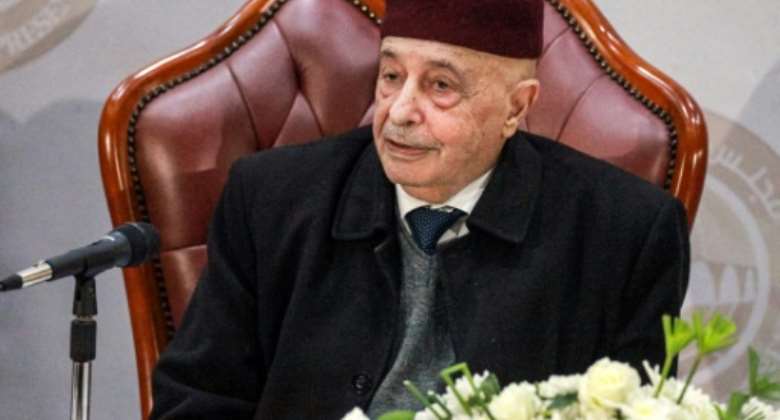 Aguila Saleh, pictured here in December 2020, has registered to run in next month's Libyan presidential election. By Abdullah DOMA (AFP/File)

Libya's parliament speaker Aguila Saleh registered Saturday to run in next month's presidential election, joining a military strongman and the son of Moamer Kadhafi in the contest.

Libya's first ever direct presidential poll, due on December 24, comes as the United Nations seeks to end a decade of violence in the oil-rich nation since a NATO-backed uprising that toppled the dictator Kadhafi in 2011.

Saleh is the 24th candidate to sign up at the offices of the electoral commission, the HNEC, with the 77-year-old registering his details in the eastern port of Benghazi.

"I came to the HNEC office in Benghazi to submit the documents necessary for my candidacy," said Saleh, appealing to Libyans to take part in the vote, in a speech broadcast by the Libya Tantakheb station.

Saleh is considered to be close to eastern military chief Khalifa Haftar, who registered his name in the race on Tuesday.

That move came just days after Seif al-Islam Kadhafi declared his own candidacy, a decade after his father's death in a NATO-backed uprising.

Pro-Haftar forces remain in control of much of eastern and southern Libya, and some analysts have voiced scepticism over the chances of a free and fair vote.

Nearly three million Libyans -- out of total population of some seven million people -- have so far registered to vote.

But the runup to the vote has been marred by bitter divisions over the legal and constitutional framework, and many in western Libya have rejected any run by Haftar, who led a devastating but ultimately unsuccessful campaign to seize the capital before he was pushed back in 2020.

In September, Saleh ratified a contentious electoral law criticised for bypassing due process and favouring a bid by Haftar.

On Friday, hundreds of Libyans protested in the capital Tripoli and in the city of Misrata over the law.

Demonstrators stamped on posters of Haftar and Seif al-Islam Kadhafi, who is wanted by the International Criminal Court for alleged crimes against humanity.

Both presidential and legislative polls had been slated for December 24, but in early October parliament split the dates of the vote by postponing legislative elections until January, a move criticised by some.

The path to the ballot box has been lined with disputes over the constitutional basis for the polls and the powers to be given to whoever wins.