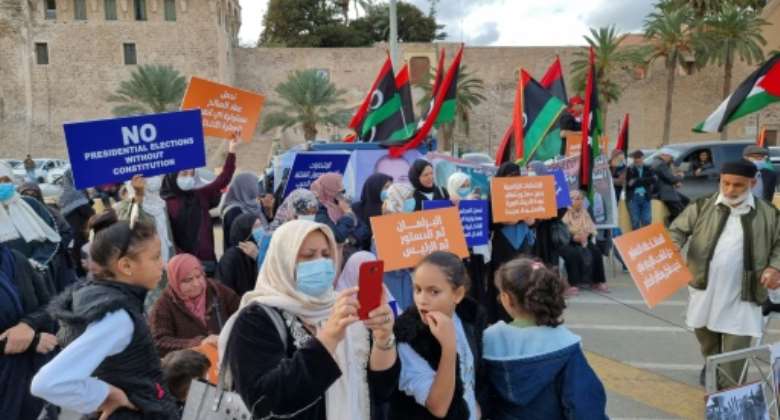 Demonstrators stamped on posters of Haftar and Seif al-Islam Kadhafi, and voiced anger over a controversial electoral law criticised for bypassing due process and favouring a bid by Haftar.

One speaker called for "all those who have committed crimes against the Libyan people" to be disqualified from the race.

"The blood of our martyrs wasn't spilt in vain," said another.

The protests come at the end of a week that saw both Haftar and Kadhafi register to run in the December 24 election, which is part of a United Nations-led process attempting to draw a line under a decade of conflict since the fall and killing of Kadhafi senior in a 2011 revolt.

But the runup to the vote has been marred by bitter divisions over the legal and constitutional framework, and many in western Libya have rejected any run by Haftar, who led a devastating but ultimately unsuccessful campaign to seize the capital before he was pushed back in 2020.

One demonstrator on Friday carried a placard reading "No to elections without a constitutional basis!"

Protesters shouted: "Yes to elections, no to criminals!"

The head of the High Council of State, the parliament's upper house based in Tripoli, said he would boycott the vote and warned against holding elections without a legal framework agreed by all sides.

"The process we're seeing today in Libya is bizarre. There's no constitutional basis or clean electoral list," Khalid al-Mishri said in a video on Facebook.

"We're aware of the strong desire among all Libyans for change."