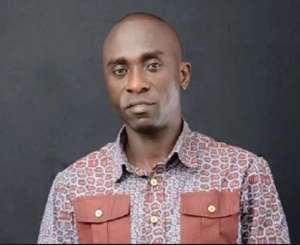 Convener of the Fixing The Country Movement, Ernes Kofi Owusu Bempah says the Electronic Transaction Levy (E-Levy) being introduced by the government is not only broad and equitable but ultimately fairer.

His comments come on the back of the agitations by Ghanaians and the Minority MPs following the announcement of the Levy by Finance Minister Ken Ofori-Atta during the presentation of the 2022 Budget Statement on Wednesday, November 17, 2021.

In a statement, Ernest Owusu Bempah has said the complaints by the Minority are just distortions, cat-calls, and propaganda in an attempt to water down the lofty objectives of the government's 2022 economic policy.

According to him, the newly-introduced E-Levy is the kind of tax that has been long coming.

“First, the Electronic Transaction Levy (E-Levy) is Broad, Equitable, and ultimately Fairer, the kind of tax we all have been advocating for. It must also be viewed against the new tax reliefs for businesses, and increased investment in supporting entrepreneurship through the YouStart initiative,” part of the statement issued by the Political Strategist has said.

Ernest Owusu Bempah in his statement further insists that the “2022 Budget statement is the most empathetic, thought-provoking, and forward-looking budgets in recent years against the backdrop of disruption and “pain” imposed on Ghanaians by CoVID-19.”

In an appeal, he says Ghanaians should support President Akufo-Addo and his government to fix the damage former President John Dramani Mahama caused the country.

In accordance with Article 179 of the 1992 Constitution and Section 21 (3) of the Public Financial Management Act, 2016, (Act 921), the Minister for Finance, Ken Ofori-Atta, on behalf of the President laid before Parliament, the 2022 Budget Statement and Economic Policy of Government on Wednesday, 17th November, 2021.

The budget primarily focused on expanding on Ghana’s economic recovery from the COVID-19 pandemic, as well as creating a climate-friendly entrepreneurial state to address unemployment and import substitution.

Fixing The Country Movement sees the 2022 Budget statement as the most empathetic, thought-provoking, and forward-looking budgets in recent years against the backdrop of disruption and “pain” imposed on Ghanaians by CoVID-19.

Digitalization of the economy, skills development and entrepreneurship also featured prominently in the presentation.

The government is looking more of stabilisation as about revitalization and transformation.

But as usual, the opposition NDC is in their full elements engaging in distortions, cat-calls and propaganda in an attempt to water down the lofty objectives of the government 2022 economic policy.

As a movement, we deem it prudent and prosper to set a few records straight.

First, the Electronic Transaction Levy (E-Levy) is Broad, Equitable, and ultimately Fairer, the kind of tax we all have been advocating for. It must also be viewed against the new tax reliefs for businesses, and increased investment in supporting entrepreneurship through the YouStart initiative.

On the other hand, the YouStart INITIATIVE comes on board as a New Youth Entrepreneurship Programme.

☑ Enterprise Promotion: Mentoring and Access to Markets, including Portals to facilitate “digital linkages” between youth-led enterprises and other businesses and relevant Government agencies.

☑ The funding aspect will be structured as follows:

☑ Soft loans of up to GH¢50,000 to help start-ups (in particular by young graduates and school-leavers) and small businesses to expand;

☑ Starter packs (Soft loans tied to equipment acquisition) of up to GH¢50,000 for individuals and GH¢100,000 for associations/groups; and

☑ A standardised loan package of between GH¢100,000 to GH¢400,000 at concessional rates for SMEs through financial institutions;

☑ VAT Relief for Textile Manufacturers: Extended for another two years

☑ The Flat VAT Rate has been limited to only retailers with annual turnover not exceeding GHc500,000 to plug the loophole which has made local goods with imported substitutes uncompetitive

☑ The Modified Taxation System to simplify tax compliance for informal sector/small businesses will be amended to cover more small business by increasing the threshold from Ghc200,000 to GHc500,000

☑ WHT on sale of unprocessed gold by small-scale miners has been reduced from 3% to 1.5%

☑ All Road Tolls abolished on public roads and bridges.

These are all lofty objectives of the budget, and at the same time the administration needs revenue to revive the economy, fighting corruption and combating insecurity.

The Akufo-Addo administration is fixing the country. The government requires the support of all Ghanaians to undo the damage Mahama caused the state.

The Ghanaian economy was on a roller-coaster ride throughout the four years under Mahama as twin fiscal and current account deficits undermined confidence in the economy.

Ghana's fiscal crisis began in 2010 with huge pay rises offered to government employees, without a clear plan to increase government revenues in step. Between 2010 and 2012, the national wage bill increased 47%, eventually rising to consume more than 70% of tax revenues.

The imposition of a special 17.5% levy on petroleum was potentially more contentious. Wholesale oil prices were reduced on the international markets, but imported inflation on top of an additional tax drove up fuel prices considerably for Ghanaian citizens.

Mahama mismanaged the economy to a point where it had to rely desperately on raising taxes on cutlasses and condoms to generate revenue.

The reality is that we have been going through a big change for the past four and half years, and with each year, it only seems to grow exponentially. Denial of this does not negate that it has been occurring and will continue to occur.

As a country, we must not lose sight of the transformation agenda being rolled out by this president.

Indeed, in the year 2020, Ghana came second in attracting Foreign Direct Investment (FDI) in Africa. As a nation, we bagged $2.7billion worth of investment, out of which $2.6billion was from FDI.

The FDIs were realized from 271 registered projects in Ghana, and it is envisaged that 27,000 direct jobs were created, according to statistics from the Ghana Investment Promotion Center.

President Akufo-Addo is supporting Ghanaian workers by throwing a lifeline to them.

The country's wage bill has more than doubled under the last three (5) years. Which is why the Fixing The Country Movement, is, by this statement, calling on all right-thinking Ghanaians to stand by for our maiden match in support of President Akufo-Addo’s resilience in fixing the country.

Let’s join hands and be participants in propagating the success stories of the Akufo-Addo regime.

Adwoa Safo impersonation: Findings from our preliminary inve...
9 minutes ago

Acting Speaker Joewise throws out minority’s motion to overt...
24 minutes ago