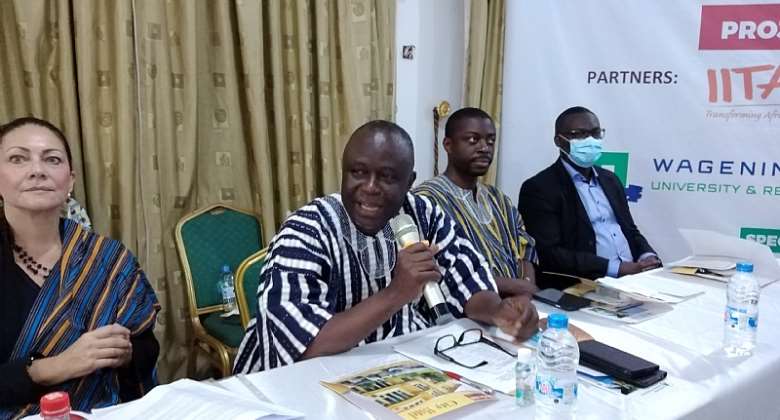 Over 400,000 smallholder farmers have been earmarked in the five regions of the North to benefit from a sustainable soya bean production project.

The project dubbed "Sustainable Soybean Production in Northern Ghana (SSPiNG)" is a four-year project to be implemented by many partners including the International Institute of Tropical Agriculture (IITA), the government of Ghana through the ministry of Food and Agriculture, YARA Ghana, Norad and WAGENINGEN University.

Under the project, about 150 agricultural extension officers are said to be engaged to facilitate and disseminate information to beneficiary farmers with a target of benefiting over 100,000 smallholder farmers.

The Deputy Minister of Agriculture in charge of crop production, Yaw Frimpong who launched the project on Thursday, November 18, 2021, in Tamale underscore the need to link the smallholder farmers to inputs and outputs market, finance, equipment, and information through larger commercial farmers and aggregators who have the capacity and incentives to invest in smallholder production to build the capacity of the smallholder soybean farmers.

"There is the need to facilitate the soya bean value chain such that smallholder farmers will be linked to inputs and outputs market, finance, equipment, and information through larger commercial farmers and aggregators who have the capacity and incentives to invest in smallholder production," he said

Moreover, he said about 87 percent of the annual soybean demand in Ghana was for industrial purposes, out of which 67 is used as feed by the poultry industry with 13 percent used to produce oil and 7 percent as food for human consumption.

"Approximately, about 87 percent of the annual soybean demand in the country is for industrial purposes of which 67 percent is used for animal feed especially in the poultry industry," he stated.

He commended the IITA, YARA Ghana, and other partners for initiating the project, and urged beneficiaries to take it seriously so that Ghana can overcome the unmet demands of the soybean in the country.

Professor Samuel Nsia Asare, the SSPiNG coordinator in his presentation said the SSPiNG was in alignment with the government's planting for Food and jobs (PFJ) program and was to be implemented in the five regions of the North with 16 beneficiary districts.

He revealed that the project would engage about 500 farmer groups to promote best practices that will directly increase the production of the soybean.

Prof Asare noted that one hundred and fifty(150) agricultural extension officers would also be employed to help disseminate information to the Farmers and other stakeholders.

"All the five regions of the North are being targeted, and out of these, we have selected 16 districts, six of them are in the Northern region," he said.

Her Excellency Ingrid Mollestad, Norwegian ambassador to Ghana, in her comments said the SSPiNG has the potentials to increase food security, jobs, and foreign exchange for Ghana.

She state that the Norwegian government was glad to partner with Ghana to improve the lives of the smallholder farmers, and pledged their continued support to the country, especially in Agriculture.

Mr. Danquah Addo-Yobo, a representative from YARA Ghana lauded the project but called for an ecosystem that will ensure the sustainability of the SSPiNG beyond donor funding.

He also commended the government for initiating several interventions to mitigate the suffering of farmers in the country such as the Planting for food and jobs, Rearing for food and export, and the one village one dam policies.