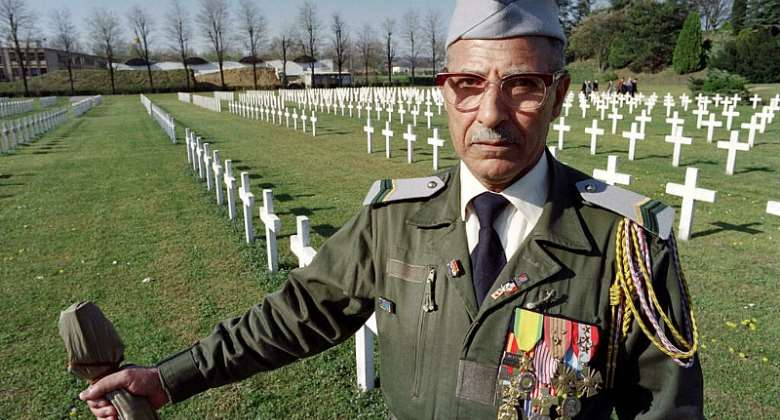 France's lower house have voted a bill providing compensation to Algerian Muslims who fought alongside France during the Algeria war of independence. The law on reparations, promised by President Macron, now goes to the Senate.

MPs in France's National Assembly have approved a draft law paving the way for reparations for the way Harkis and their families were treated at the end of the Algerian war of independence in 1962.

President Macron promised the legislation on reparations for Harkis during a speech he gave in September, in which he also asked Harkis and their families for forgiveness after they were 'abandoned' by France.

The draft law was voted on first reading by 46 votes (1 against and 6 abstentions) and now goes to the Senate for approval.

The bill has both a memorial and compensatory dimension.

On the symbolic front it recognises “services rendered in Algeria" by the 200,000 Harkis who served as auxiliaries in the French army in the war from 1954 to 1962 and "who were abandoned during the process of independence”.

It also recognises the “unworthy” conditions some 90,000 Harkis and their families lived in after fleeing Algeria for France.

Around half of them were forced to live in squalid camps and forest hamlets.

The bill provides for compensation for the prejudice they suffered, with a lump sum which takes into account how long they spent in such camps.

Geneviève Darrieussecq, Minister for Remembrance and Veterans, insisted on the "specific prejudice" of the 50,000 Harkis who were relegated to "six camps", "69 forestry hamlets" and "several other places” where they were “deprived of freedom”.

She described this as “particularly contrary to our Republican principles".

She acknowledged there were "grey areas, even 60 years later",  and said that if additional places of detention were identified they would be integrated in the bill.

Some opposition MPs had pushed, unsuccessfully, for all 90,000 Harkis and their descendants to be eligible for compensation and not only those held in transit camps and forest hamlets.

A hardship fund was set up in 2018 for the descendants of Harki fighters and some €50 million has already been allocated in the draft 2022 budget to top that up.

The bill refers to an overall sum of €302 million, spread over several years.

“We estimate that 6,000 compensation claims could be opened from 2022 onwards,” said MP Patricia Marallès from the ruling LREM party, and who brought the bill before parliament.

But reparations "do not erase painful memories", stressed Geneviève Darrieussecq, who called for “truth and honour” to turn one of the “darkest pages of French history”.

The bill also contains measures to help widows of former Harki fighters and provides for a commission to work on the gathering and transmission of memories of Harki families.

In 2003, France has marked National Harki Recognition Day each year on 25 September.

In a symbolic gesture, MPs voted on Thursday to have the 25 September date explicitly "enshrined in law".

Covid-19: Pre-packed snacks should be served in planes to cu...
59 minutes ago