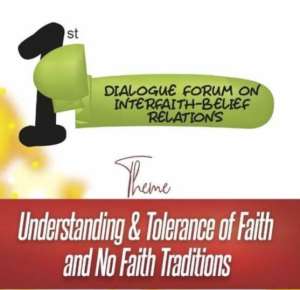 As delegates from faith and no faith communities are preparing to meet and dialogue in Abuja, it is pertinent to emphasize some of the virtues of two-way communications. Dialogue is important in ameliorating tensions between persons or communities that hold divergent views, opinions, and beliefs because diversity could be a source of division. Too often different views breed tension, suspicion, and conflict. But dialogue happens and can happen when parties are willing to talk and communicate as equals. Dialogue happens when parties are ready to set aside their differences and emphasize their commonalities and shared values.

Dialogue fosters mutual understanding, and provides an avenue for a better knowledge of the other, in this case, the religious or non-religious other. Unfortunately, mistrust and hate prevail and create disharmony in communities. The toxic relationship between persons from faith and no faith communities is often predicated on ignorance and entrenched unwillingness to know and understand the other. Ignorance breeds arrogance and a false sense of pride and superiority. Ignorance undergirds religious intolerance and antagonism in the communities.

So, it is important to break these barriers that have left religious and non-religious people in the dark for too long. It is necessary to knock down the walls that hamper knowledge of the religious and non-religious other. It was the British philosopher Francis Bacon who says that knowledge is power. That means, with knowledge one can wield enormous influence and exert an impact on oneself and others. The flip side is that, without the knowledge, or with pretensions to knowledge people are capable of doing so much harm. Human beings can destructively exert power. So, while knowledge is 'powerful'. Ignorance is dangerous. Many centuries ago, the Muslim jurist, Ibn Rushd (Averroes) drew attention to the vicious equation and slippery slope of ignorance. He said: "Ignorance leads to fear, fear leads to hatred, and hatred leads to violence. This is the equation". Yes, this is the equation, the religious and ideological equation, that prevails in many parts of the world.

In situations, where mistaken ideas and notions are taken to be knowledge; in contexts where misconceptions and prejudices are handed down as immutable truths and eternal wisdom, people wield power in dangerous and harmful ways. People exert a pernicious influence on others. The Christian scripture is aware of the dangers of ignorance and warns against it. The Bible states that people perish for lack of knowledge (Hosea: 4:6). The Islamic prophet enjoins Muslims to seek knowledge from cradle to the grave. Incidentally, many people in faith and no faith communities suffer and die for lack of understanding of the other. Many people cause religious and non-religious others to suffer or die due to their lack of knowledge. This destructive strand is pervasive because in seeking knowledge, many believers self-conceitedly limit themselves. First, they limit themselves by seeking and appropriating only consistent knowledge forms, not those in conflict or contradiction with their faith or what is written in their books. Meanwhile, there are so many forms of knowledge outside the boundaries of religions and sacred texts.

Committed only to faith-or Book-based knowledge, many from faith traditions only want to dialogue with people of the Book, that is, those from Abrahamic religious traditions. They are unwilling to dialogue or relate equally with those from 'non-book or `non-Abrahamic religious traditions', including African traditional religionists, Hindus, and Humanists. This grave omission is inimical to the spirit of dialogue, and needs to be corrected. The place to begin this much needed rectification is in Nigeria, where these traditions meet and are in constant interaction with one another.