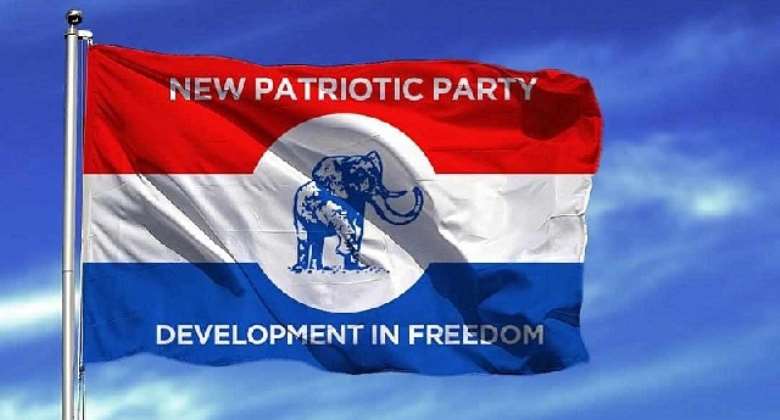 The youth wing of the governing New Patriotic Party (NPP) at Twifo Hemang Constituency in the Central Region has rendered an unqualified apology to the Denkyirahemaa and her family for their role in ousting Mr. E.K Nannah, the former District Chief Executive for the area.

“I would like to render an unqualified apology to the Denkyirahemaa and her family on my own behalf and that of others who played a role in taking out his brother from office when he had done no wrong to us.

“Nanahemaa, we were misled and we fell short and misbehaved, it is our hope that we will be pardoned,” the youth leader Kwabena Oteng said at a press conference held Thursday, November 18, 2021 in the constituency.

OPEN AND PUBLIC APOLOGY TO THE DENKYIRAHEMAA & FAMILY BY TWIFO HEMANG NPP YOUTH FOR THEIR ROLE IN THE OUSTING FROM OFFICE HON. EK NANNAH, IMMEDIATE PAST DCE

We want to welcome our friends from the media, all party members and the general public to this very gathering which has been necessitated by several events.

We like to go straight to the point by acknowledging our role in the event of the September 27th, 2017 which subsequently led to the ousting from office then Hon. EK Nannah who functioned as the District Chief Executive (DCE).

In doing so, I Kwabena Oteng alias Kantinka who championed the course do have a confession to make and I hope it will be the last time I will ever have to make such confessions on the back of party events.

I was misled by my Hon. Bright Wireko-Brobby, MP into believing that, Mr. E.K Nannah did not have the interests of the party youth at heart especially because he was battling all his efforts to properly place the youth near opportunities as MP and, therefore, bringing in NDC members to his dining table as DCE and courting disaffection for him as MP, and so dwindling the party's fortunes.

It was a case where we were convinced beyond doubt at the time to believe that, should we as youth fail to act, our toil for the party's success would be in vain and hence a call for immediate action.

We acted on the guidance and directions of the MP and he solely sponsored all the actions we undertook in ensuring that Mr. EK Nannah was taken out of office.

It was a 'son - father' communication and so I was planted on the grounds to operate as the agent provocateur & I executed the task to his satisfaction which saw him hire a lawyer for our representation in court even when police managed to take some of us and put before court for prosecution.

Our brothers from Jukwa Zongo in particular, will recall that I came to Jukwa two days preceding the event to call for their support in the event of demonstration against the DCE then.

Yes, it was all an activity planned and executed by the Hon. MP and I still have the evidence of same in my possession, and when I have to bring it to support anything of a sort, I will.

The reason for my apology and confession is premised on two main reasons or factors being:

1. The Hon. MP is up for himself (on a selfish agenda) and whoever is not up to the task for his gains or whoever does not live his way is treated an enemy and he seeks to oust the fellow from his office in the party or in government which has been realized and it was on this exact note that he willfully brought down Mr. EK Nannah.

2. You may not be aware, but he is after the current DCE too, in case the DCE Kennedy Sarpong is unaware, I am drawing his attention immediately that MP is after your expulsion from the office you occupy because you are not helping his selfish agenda.

On realizing that, MP is only interested in those who stand up to hail his own selfish agenda, and that he would eliminate any person(s) who stand up to him, I have had to be extremely careful because; his agenda will not help the party's course.

In December 2016, one would testify that, we had close to a 5000 votes difference, and yet because of his actions which has come far to separate us and put us in a corner of harm as a party, we could not even afford to garner half of the votes we got in 2016 in 2020 election.

I like to bring to your attention that, if we proceed to election 2024 and he ever becomes our Parliamentary candidate which I believe he will not, we will lose the election to any serious candidate from the opposition NDC.

But I hope he realizes it by himself earlier and backs down from any such contest which will bring us defeat.

Much is said and more will be left unaddressed especially for now.

But be it as it may, I like to render unqualified apology to the Denkyirahemaa and her family on my own behalf and that of others who played a role in taking out his brother from office of government when he had done no wrong to us.

Nanahemaa, we were misled and we fell short and misbehaved, it is our hope that we will be pardoned.

Let the records show again that, I am not doing this for any particular person's bidding or parochial interests, as no person shall succeed in purchasing my conscience.

I have done this to rather free myself from the guilt I live with and to make amends and seal the vacuum I have created.

I have lost friends and colleagues all because of this single person (MP) who is up to no good for no one but himself.

Let the records show again that, I have no personal hate or disregard for him (MP) he is my father's younger brother who is able to succeed my father should he die today.

Rather, I am freeing my self-inflicted political wounds I have suffered for his interests which has brought no good to myself or no one.

Adwoa Safo impersonation: Findings from our preliminary inve...
47 minutes ago

Acting Speaker Joewise throws out minority’s motion to overt...
1 hour ago