Bagbin is not your co-equal, he has seen it than you; respect him – Minority, Majority in 'dogs fight' 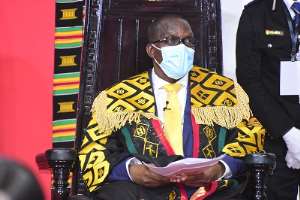 The Minority in Parliament has asked the Majority to better stop disrespecting the Speaker of Parliament and accord him all the dignity he deserves.

According to the Minority, the leadership of the Majority is behaving as if the Speaker was a leader of the legislature by default.

“As leaders in the Minority, we will not sit down for the New Patriotic Party Majority to disrespect the authority of the third most important personality in the country per the tenets of the 1992 Constitution.

"We will preserve the sanctity of the position of Speaker of Parliament," Deputy Minority chief whip Ahmed Ibrahim warned.

Mr Ibrahim was reacting to the warning issued by the Speaker for the Minister for Roads and Highways to reverse his decision to scrap the payment of tolls on Accra-based Neat FM.

He noted that Speaker Bagbin was equally elected as all other Speakers of Parliament of the Fourth Republic and no group of individuals who will set out to show gross disrespect to his authority will be countenanced by the Minority.

Mr Ibrahim further noted that the Minority will not sit down for the Majority to defy the aura of respect around the position of the Speaker.

“The position of Speaker is no mean feat in the scheme of the country’s constitutional dispensation,” he said.

He noted that Speaker Alban Sumana Kingsford Bagbin has no match as a Member of Parliament for the good people of Nadowli Kaleo before becoming the Speaker.

“Mr. Speaker has no co-equal as a Member of Parliament after serving the Legislature from the onset of the fourth republican dispensation. Mr. Speaker as the longest-serving MP presupposes that he knows his worth as well as the rules and regulations of the House.

“Mr. Speaker has seen it all as an MP and as a Speaker, so there is no way we as the Minority will sit aloof for his powers as Speaker to be disrespected by the Majority,” he stressed.

“Mr. Speaker has seen it all and he knows the inside-out of Parliament as well as the rules of engagements for Parliamentarians than any other MP currently in the House,” he argued.

“So there is the need for all to accord him (Speaker) the respect he deserves,” Mr Ibrahim noted.