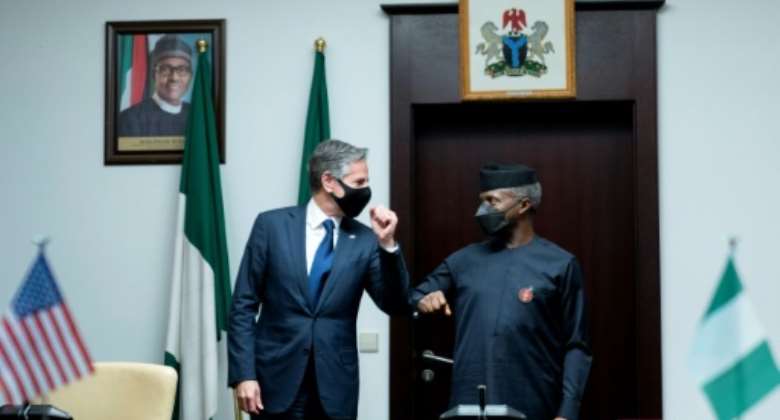 On his first trip to sub-Saharan Africa, Blinken is seeking to show US commitment in the face of a rising China. By Andrew Harnik (POOL/AFP)

Secretary of State Antony Blinken on Thursday backed a greater leadership role by Nigeria but also encouraged accountability over human rights concerns which have rattled the US relationship with Africa's most populous nation.

On his first trip to sub-Saharan Africa, Blinken is seeking to show US commitment in the face of a rising China but is also encouraging African-led solutions to problems, including the spiralling war in Ethiopia.

With 20 percent of sub-Saharan Africa's population and its largest economy, Nigeria has worked with successive US administrations since the return of civilian rule in 1999.

But US views of Nigeria, already marred by years of violence and rampant corruption, hardened last year after security forces were accused of unleashing deadly violence during massive protests against police brutality.

Blinken welcomed a Nigerian investigation into the violence but called for more action.

"We anticipate and look to the state and the federal governments' response to the findings and expect those to include steps that ensure accountability and address the grievances of the victims and their families," Blinken said.

President Muhammadu Buhari, in a meeting with Blinken, said that Nigeria has been transparent and followed a process.

"We at the Federal have to wait for the steps taken by the states, and we have to allow the system to work. We can't impose ideas on them," Buhari said.

Concerns over human rights have prompted wide concern in Congress, with Senator Bob Menendez, a member of President Joe Biden's Democratic Party who chairs the Senate Foreign Relations Committee, calling for a "fundamental rethink" of the relationship.

Protesters in Abuja gather in October 2021 with placards to commemorate one year after the police crackdown on Nigeria's EndSars mass demonstrations. By Kola Sulaimon (AFP/File)

Blinken's predecessor Mike Pompeo made the decision late in his term at the urging of evangelical Christians who say that attacks on the community in the religiously diverse nation are systematic.

Nigeria hailed its removal from the list, with a government statement saying that the country does not "have a policy of religious persecution".

A senior US official said that the Biden administration hoped to engage more with Nigeria, drawing an implicit contrast to the perceived lack of interest in Africa by Trump.

"I think we've been a little erratic and maybe inadequate in recent years, so I would like to see us up our game in terms of the quality and quantity of our engagement," the official said.

Biden is hoping to show US leadership in Africa, including on fighting the Covid-19 pandemic and battling climate change, as part of a global competition with a rising China -- which has avidly pursued resources in the continent with little fuss about democratic governance.

Using language more subtle than the Trump administration, Blinken said the United States was not focused on China but wanted a "race to the top".

Nigerian Foreign Minister Geoffrey Onyeama, speaking with Blinken, dismissed concerns about China, saying that the Asian power offered a "great opportunity" for a country in need of infrastructure.

"We would have gone with anybody else, providing something at a competitive rate for us," he said.

In each stop on the three-nation tour, Blinken is meeting with civil society as well as governments as part of a push for democratic values.

Oge Onubogu, West Africa director of the US Institute of Peace, said there should be no more "business as usual" after last year's protests and that the United States needed to deal more directly with the Nigerian people.

"That's what folks will be looking at. They will be saying, ok, the tone is changing, but they will want more assurances that things are actually changing in the right direction," Onubogu said.