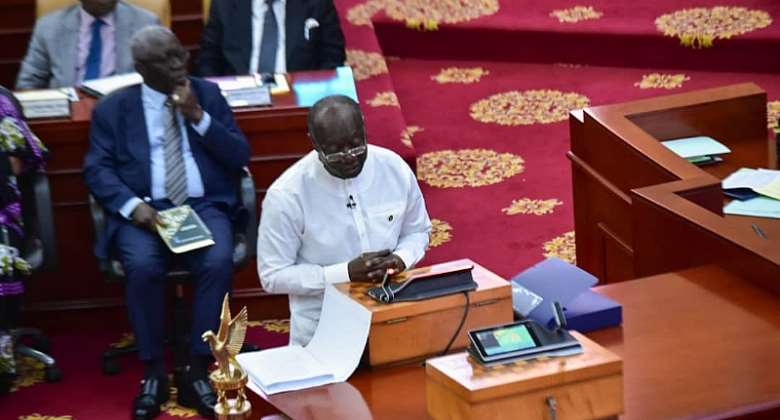 Ever heard of the notion of robbing poor Peter to pay rich Paul? Well, if you've never had real life encounter, H.E Nana Addo Danquah Akufo-Addo and H.E Dr. Mahamudu Bawumia together with several others have presented you and I a chance to witness it as they loot excessively from the poor masses as presented in the 2022 budget statement which was read by the Finance Minister Mr. Ken Ofori-Atta, the man who wears white, carries a brown bag, quote the Bible and tell us lies into our faces.

Prior to the 2016 presidential elections, H.E Nana Addo Danquah Akufo-Addo and his NPP together with the Vice President who was touted the economic messiah who has today only proven that he is only a Walewale Adam Smith promised the good people of Ghana the removal of a number of taxes they termed "nuisance taxes". Contrary to what they had promised, they only came to cause excessive increment of these taxes and in some cases, they prolong the duration for which some of these taxes were supposed to be paid for. I'd like us to embark on a short journey to revise our memories on some of these taxes impositions this government has burdened the citizens with.

Several taxes like the communication service tax which caused data tariffs to be highly costly and others have not been included in the aforementioned taxes. We need to also turn a blind eye to the duplicity that the introduction of the sanitation tax on all petroleum products has brought us. It is no news to us the sanitation levies are taken at the district assembly levels. So in effect, today, a driver who buys petroleum is paying a tax on sanitation both to the central government and district assembly.

It is very preposterous for a government to impose a tax like COVID-19 tax on its citizens in baleful times like this. It could be likened to taxes being imposed on Ghanaians during the Ebola pandemic under H.E John Dramani Mahama. In my view, taxes shouldn't be imposed on citizens in times of crisis but mitigating steps should rather be taken to help alleviate the citizens of the sufferings the crisis has faced them with.

As if this has not been enough. This government seeks to impose 1.75% on all electronic transactions. Which means that the regular business man who sends GHS 1,000 to his worker will now pay GHS 27.5 as commission instead of the regular GHS 10. This also means the already afflicted worker now has to pay GHS 27.5 instead of GHS 10 in order to withdraw his or her salary. This tax also extends to the remittances families receive from their loved ones abroad.

Again, this government seeks to impose 15% fees and charges on some services rendered by government agencies. They seek to charge 15% percent on birth registration, passport application, death registration and several others. This is obviously a heartless initiative.

It is very important to consider Ghana's tax to GDP ratio which is sinking below 15% when issues about taxes are raised. This has been our current state because this government has resorted to given high tax waivers to party compatriots. Recently, the office of the special prosecutor has been petitioned against La Bianca Company Limited whose owner is said to be a party financier over issues of tax evasion.

Talking about debt sustainability, according to the Finance Minister, Ghana's debt stock stood at GHS 341.76 billion as of September,2021. This indicates an increase of GHS 221.76 billion over the GHS 120 billion inherited in 2017 with a debt to GDP ratio of 56%. We had hoped that the 2022 budget would provide specifics on how the administration planned to lower the public debt load and regain investor confidence. Unfortunately, the finance minister's budget does not provide much hope that this will happen. Experts have predicted Ghana's debt stock to hit GHS 355 billion which will represent a debt to GDP ratio of 82% which is the highest the country has ever recorded after HIPC. This clearly indicates that the country is broke!!!

In conclusion, I am of the view that the 2022 budget proposal that has been presented before parliament is of no good to the ordinary Ghanaian. There is no iota of hope coming to the people in this time of distress. It is clear that this Akufo-Addo/Bawumia government has nothing fruitful to offer the people of Ghana.

One confirmed dead in youth, Police clash at Kotobabi Market
34 minutes ago