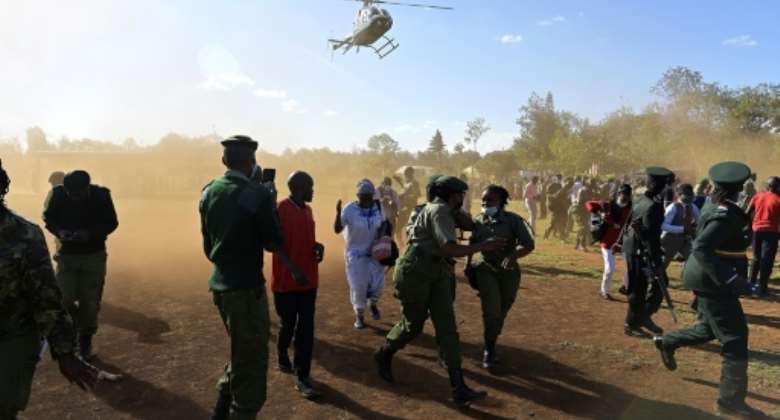 Kenya has recaptured three 'dangerous' inmates who escaped from a heavily guarded jail on the outskirts of the capital. By Simon MAINA (AFP)

Kenya on Thursday announced heightened security measures after the recapture of three "dangerous" inmates who had escaped from a heavily guarded jail in a scandal that cost the country's prisons boss his job.

The authorities had launched a nationwide manhunt for the trio, who included a convict serving 41 years for involvement in one of Kenya's deadliest attacks carried out by the Somali jihadist group Al-Shabaab.

Police said the inmates were picked up Thursday deep in a forest about 200 kilometres (120 miles) east of Nairobi following their jailbreak from Kamiti Maximum Security Prison on the outskirts of the capital on Monday.

The Inspector General of Police Hillary Mutyambai said they were suspected to have been heading to the eastern town of Garissa, with their final destination likely Somalia.

Mohamed Ali Abikar was serving 41 years for involvement in one of Kenya's deadliest jihadist attacks. By Simon MAINA (AFP)

Interior Minister Fred Matiangi announced after their capture that the government had "raised the level of alertness" and increased security across the country including at airports and railway stations.

"We are not out of the woods yet. We are in an unusual space because of what is happening around us. Please let us be careful and watchful," he said.

The minister on Tuesday described the escapees as "dangerous criminals".

The heightened measures also follow twin suicide bombings in neighbouring Uganda on Tuesday that were claimed by the Islamic State group.

Of the three inmates, Mohamed Ali Abikar was found guilty in 2019 of being a member of Al-Shabaab and abetting the militants in the slaughter of 148 people at Garissa University in April 2015.

It was the second bloodiest attack in Kenya's history, surpassed only by Al-Qaeda's bombing of the US embassy in Nairobi in 1998 that killed 213 people.

The three inmates managed to break out of Kamiti Maximum Security Prison on Monday. By Simon MAINA (AFP)

The other two were identified as Joseph Juma Odhiambo, who was arrested in 2019 for trying to enlist in Al-Shabaab, and Musharaf Abdalla Akhulunga who was detained in 2012 over a foiled attack on Kenya's parliament.

Kenya's prisons boss Wycliffe Ogallo was sacked on Wednesday and briefly detained over the embarrassing escape, which has also seen the arrest of top officials and wardens at the Kamiti facility.

Media reports said there were conflicting accounts about how the three men managed to break out of Kenya's most heavily guarded prison.

"The mistakes that were committed here on Monday are unforgivable," Matiangi said as he witnessed the return of the prisoners to Kamiti.

"It was a very frightening and horrific dereliction of duty," he told reporters, vowing to bring those involved to justice.