Digging for gold in DR Congo, a desperate enterprise 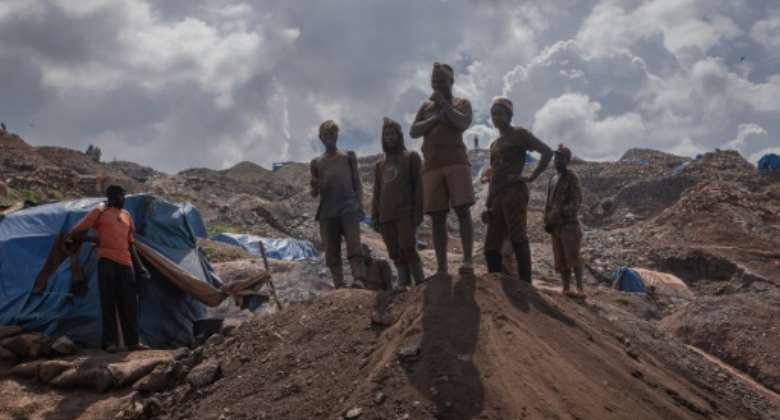 Around two years ago, the area in Luhihi started attracting diggers when locals discovered a hill where they said you could 'pick up gold from the ground'. By Guerchom NDEBO (AFP)

"We enter the mine like animals, on all fours, and if we get tired, we slide down on our bums," says Hardy Bisimwa, a gold miner in DR Congo.

The 22-year-old toils away at a mine in Luhihi in South Kivu province without any kind of protection, his hands bare, a torch on his head.

Around two years ago, the area started attracting diggers when locals discovered a hill where they said you could "pick up gold from the ground".

Since then, close to 200 families have set themselves up near the mine, living in makeshift wooden structures covered with blue tarpaulin.

Hardy Bisimwa, a father of two, has only found gold once in seven months. By Guerchom NDEBO (AFP)

Artisanal diggers have been recognised by law since December 2018, allowed to mine as long as they belong to a cooperative and pay their dues to the state.

The law though is rarely enforced and in Luhihi, police are nowhere to be seen.

In the absence of the state, popular justice is meted out.

Didier Ciza, a civil society representative in Luhihi, complains that "all thieves are lynched".

Close to 200 families have set themselves up near the mine, living in makeshift wooden structures covered with blue tarpaulin. By Guerchom NDEBO (AFP)

And the gold itself remains elusive, as do the miners' rewards.

"We don't even have the means to find soap to wash ourselves," says Bisimwa, his body covered in yellow dust from the clay soil.

In seven months, Bisimwa only found gold once.

But he says he's not losing hope.

"With God's help, I will still find some to provide for my wife and three children."

DR Congo's soil is full of mineral wealth, be it gold, coltan, or cobalt.

Yet a large majority of the population lives on less than $1.90 a day, the international poverty rate, according to the World Bank.

Bertin Muruha, a 19-year-old who failed his final year school exam in 2019, also works in the underground labyrinth without a mask or helmet.

An artisanal miner pans for gold in the Luhihi gold mine. By Guerchom NDEBO (AFP)

He toiled away for more than a year before bringing any gold back.

Carrying a bag full of stones that he dug up underground, he heads to the crusher, an old machine that smashes up the rocks.

In a little canal of water nearby, a man is already busy washing through his crushed mass to remove any impurities, without any gloves.

Any gold found is given to the local owners of the shafts who sell it to traders in Bukavu, capital of South Kivu.

The diggers work without any kind of protection. By Guerchom NDEBO (AFP)

In Luhihi, a kilo of gold fetches $450 -- far below the global price for the precious metal. And even then, it's unclear what the diggers themselves get for the few grams they find.

And local communities complain they are not seeing any of the benefits of the mining.

"This quarry no longer has enough gold," says Sifa Nshobole, a local resident in Luhihi.

"If they find any, it doesn't help us at all because the miners take all their production back to Bukavu.