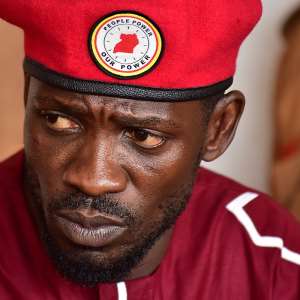 There was a Chinese man called Sun Tzu, mainly known for writing the ‘Art of the War’. There’s a term in the book that he calls it a ‘lost agent’ – meaning someone you give or sell false information to, but you don’t reveal who you are – you work with him, you use him for manipulation and provocation, keeping him in the darker about your actual strategy. Basically, everything must work within safety limits. Does anybody sound familiar when it comes to NUP bloggers? Oh yes, It's Fred Lumbuye and a few others. Some people were feeding them information, and the boys just shared it without any verifications.

Propaganda is used by authoritarian regimes to maintain political order and influence internal and foreign opinion. Between 2017 and 2020, I believe that some of the NUP bloggers were used to spread false information against the Kabaka of Buganda, Dr. Kiiza Besigye, Katikilo Peter Mayiga, FDC and several other people. Unfortunately, most of the millennials believed in the propaganda, thus, costing FDC politically.

Nearly thirty years ago, German’s Heidrun Abromeit pointed out that election campaigns are not about programs and policy statements, but hinge upon the sale of political slogans and images as if they were goods. That’s why I think it was a mistake by FDC to ignore NUP’s propaganda. The ability to manage public perception and image is a fundamental element to modem party politics.

One of the most famous slogans of the movement that swept the country was "Twebelelemu”(meaning ‘help yourselves’). It was an equivalent of the Arab spring slogan: ‘’Alsha’ab yuridu iskat alnizam", Arabic for "The people want the fall of the regime". Besigye falsely construed it to mean that Bobi Wine was asking his tribalmates, the Baganda, to support their own, and he wasn't only corrected but attacked verbally and physically by Bobi’s supporters, which in the end bred a lot of tribals sentiments during the campaigns. So, the slogan ended up dividing people instead of uniting them.

An important slogan that has been chanted repeatedly by FDC activists for the last 20 years was “one People, one Ugandan,” had NUP supporters responding to it as " Besigye ne Museveni bebamu " meaning " Besigye and Museveni are the same ".

During the campaigns, NUP's team rested on a social media apparatus of information production, dissemination, and consumption. Almost every week, several bloggers made live videos and audios on Facebook and YouTube as ways of consuming and practicing the Party’s propaganda materials.

Within this network of social control, some sympathetic newspapers, radio stations and TVs acted as the vehicles for circulating information, while word of the mouth (mainly street talk) offered a more durable, expansive format to transfer political propaganda into homes, workplaces, and institutions.

The success or otherwise of the NUP propaganda depended as much on the vagaries of the FDC internal problems as well as on the more familiar cast of characters generating content. For instance, in 2017 FDC elected Patrick Oboi Amuriat (POA) its national president against Mugisha Muntu. The later decided to quit the party along with several MPs, which left the party exposed to attacks from its enemies. Muntu had made some statements referring to hidden " moles " within the party that had accused him of being a mole himself. Later, NUP bloggers capitalized on it to accuse FDC of having started the culture of accusing others of being moles.

POA's former work in DP as Paul Ssemogerere 's Chief campaigner in Teso didn’t save him from NUP attacks either. They accused him of being a lapdog of Besigye. Recently, the NUP deputy spokesperson, Alex Mufumbira, has accused him of being a comedian during campaigns by smearing powder in his face, and walking without shoes, yet for them they faced real bullets. For the record, POA was the most arrested presidential candidate during the 2020-21 elections, but his sabotages rarely made headlines compared to Bobi.

Bobi personally put Besigye through the ringer. The supporters were just background noise—wallpaper. He basically hit the bull’s eye through various statements he made in different forums during the 2020-21 campaigns.

By 2020, almost every Ugandan who had access to social media had been convinced that Besigye had been working for Museveni since 2001 when he first stood against him. To cite just one example, around 2019, Bobi was hosted by Patrick Kamara on NTV, and he's quoted saying, " Other people's petrol stations are opening but, for me, my shows were stopped. I can't sing anymore ". He was literally referring to Besigye’s petrol station at Nsambya that he franchises from Total. A few days later, Hon. Beti Nambooze was quoted by the daily Monitor reminding people that Bobi’s petrol stations in Gomba were also still operating. Nambooze hadn’t yet joined NUP then.

Up to now, the NUP leadership has no tolerance for the existence of another pressure group, and it has committed itself to eradicating the democratic aspirations the newly formed PFT embodies, by deploying propaganda and leveraging its controlled and allied social media outlets.

It should scarcely surprise us, therefore, that soon after Bobi was recently blocked from crowding the streets in Mbale on his way to a radio station, he said that some people hold rallies (in reference to Besigye and PFT) while he's being stopped.

Large quantities of propaganda have been produced against the Lord Mayor, Erias Lukwago, and his Deputy, to further the NUP’s latest political campaigns and ideological goals. Lukwago has always ignored their propaganda, but Nyanjura Doreen couldn't ignore the fake tweet that was going around during the Makerere guild campaigns, claiming that he had asked voters to either vote for FDC's Obed Kamulegeya or the NRM candidate.

The propaganda against Besigye and FDC was effective but the young people spreading it, were limited by their lack of organization and inexperience. For example, they could make fake videos and photos placing Besigye in Statehouse with Museveni, when during that time frame, he was out of the country.

The bottom line is that propaganda in our politics is now here to stay. Any party or politician who ignores it, will sink to deeper levels. NUP will never dissociate itself from propaganda because that what sold them to Ugandans. So, expect more fake news, fake videos, e.t.c, as long as NUP is still dominating our opposition politics.

OK, that will be £2000 for this piece, or you can continue believing in NUP propaganda.Lol!