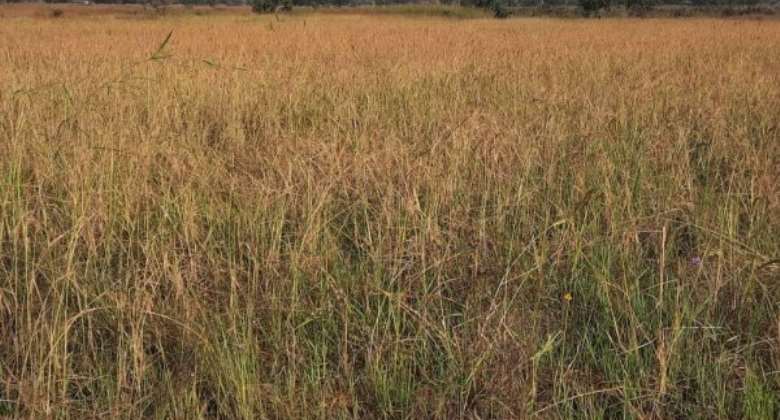 About 90% of rice on the fields in the Saboba District of the Northern Region cannot be harvested using combined harvesters, Mr Musah Abdulai, Saboba District Director of the Department of Agriculture has said.

Mr Abdulai explained that rice farmers in the area failed to harrow their fields during land preparation leaving them undulating, a situation, which made them difficult for combined harvesters to access.

He stated this in an interview with the Ghana News Agency at Saboba to explain why ready-to-harvest rice had remained on the fields in communities in the Saboba District.

The GNA toured some communities of the district and observed that ready-to-harvest rice along the main Yendi-Saboba Road and Saboba- Chereponi Road was yet to be harvested.

Some farmers were seen using the manual means of harvesting their rice by using sharp knife to cut the stem of the rice plant, a laborous process, and took a lot of time.

They added that even if they harrowed their fields, they would not get combined harvesters because there was only one combined harvester in the district, which was privately-owned, and always busy around this time.

The danger is that if the rice is not harvested within the next few weeks, the rice fields could be burnt as result of bush fires, which are common in those areas around this time of the year.

Using combined harvesters ensures that the rice is harvested fast, and the grains are protected from breaking, thereby ensuring quality of the grains.

The Department of Agriculture, Saboba District projected that 5,386.65 hectares of rice would be cultivated in the area this year.

Mr Abdulai spoke about access to harrows in the district, saying it was only one tractor in the area, with harrow attached to it.

He, therefore, advised rice farmers in the area. "Do not be buying tractors alone, buy tractors with harrows to level your fields during land preparation." He added.