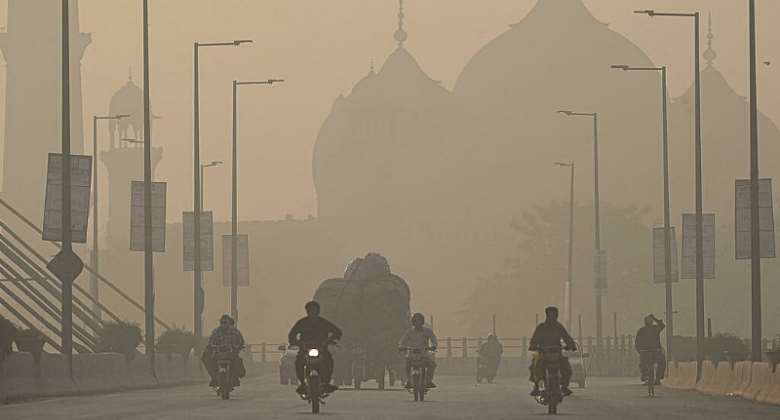 India's capital shut down all colleges and schools as well as six of the city's 11 coal-fired power plants and banned construction after the Supreme Court called for steps including work from home for millions to tackle high air pollution in Delhi.

India's Supreme Court has also ordered millions to work from home in Delhi and its suburbs amid high air pollution in the capital where schools took a week-long break and factories and construction shut down to limit smoke and dust.

It also suggested several other measures for the city of 20 million where a health survey said 44 percent of residents reported some from their family members had visited doctors or hospitals with pollution-linked illnesses.

Experts say the Delhi smog is laced with air-borne PM2.5 toxins which travel deep into the lungs and can also clog the blood stream.

The top court stepped in days before an index of air quality in Delhi's diplomatic enclave touched 416 on a scale of 500 on Tuesday, signalling "very poor” conditions that can cause respiratory illnesses.

A three-judge panel called for urgent measures to check burning of farm waste in adjoining states where farmers set off bonfires to clear fields for the winter sowing season.

“It is very unfortunate we have to set the agenda for them,” the judges said as they prodded the authorities to an emergency meeting.

Pollution Lockdown
The Delhi state government pledged to do more to beat down the eye-stinging smog that hung over the city for the 14th straight day.

“We are ready for a complete lockdown,” Environment Minister Gopal Rai said but argued it would be meaningful only if three neighbouring states follow suit.

The latest health survey by LocalCircles, a community-based network, said city residents were split over the impact of a lockdown in Delhi, often ranked the world's most polluted capital.

Environmentalists such as Vimlendu Jha argued in various public debates a lockdown would provide a “band-aid” comfort while the recurring crisis needed a durable solution.

“My sense of anger comes from the fact at in post-Covid times we should be more concerned about pulmonological and respiratory challenges and here we are not doing anything,” Jha said.

Delhi bore the brunt of the pandemic as coronavirus injured 144,000 residents and killed 25,000, mostly during a spring surge when hospitals ran out of oxygen and beds and city crematoriums worked overtime.

Political showdown
The city administration, run by AAP, or the rookie Aam Aadmi Party, was also caught up in a punch-up with Indian Prime Minister Narendra Modi's ruling BJP party and the main opposition Congress.

"It is high time political accountability was fixed and the people of Delhi should hold both the BJP and the AAP accountable for playing with their health and jeopardising it," Congress leader Jaiveer Shergil said.

AAP snapped back at Modi's BJP for running "a smear campaign".

COP26 Conundrum
The local slugfest came not before premier Modi's pledged to cut emission to net-zero by 2070 and reduce carbon emissions by a billion tonnes by 2030 as two of five measures he listed out at the COP26 climate summit in Glasgow.

Activists said Modi should have addressed the burning issue of filthy air back home at the now-ended summit as well.

“Air pollution affects every organ of the body bar none and that is what we are doing to our citizens today,” anti-pollution activist Jyoti Pande Lavakare told NDTV.

“You can't go to COP26 and then have a country which is sickening and dying at home and you don't even address that? We have not had a single statement,” she said.

“I think we need the leader of this nation to come out and say 'this is a big problem,'” added Lavakare, co-founder of Care for Air charity in India.